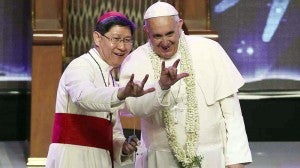 In a statement, Tagle on Thursday also appealed to non-Christians, educators, politicians, businessmen, experts on science and technology to “study the encyclical and its proposals.”

The encyclical, “Laudato Si” (Praise Be to You), “does not pretend to resolve scientific questions related to the environment and climate change,” Tagle said. “Rather it offers a pastoral analysis and appeal nurtured by the Bible, Catholic social teachings, the pronouncements of Popes and a reading of the current ecological conditions we are facing.”

In his first solo encyclical, Pope Francis addressed “every living person on this planet,” urging them to hear “both the cry of the earth and the cry of the poor” about the damage from “compulsive consumerism,” waste and a single-minded pursuit of profit.

“Never have we so hurt and mistreated our common home as we have in the last 200 years,” Francis said in his encyclical. “The earth, our home, is beginning to look more and more like an immense pile of filth.”

Francis called for a bold cultural revolution to correct what he said was a “structurally perverse” economic system in which the rich exploited the poor.

Citing the deforestation of the Amazon, the melting of Arctic glaciers and the deaths of coral reefs, the Pope rebuked “obstructionist” climate change doubters who “seem mostly to be concerned with masking the problems or concealing their symptoms.”

And he accused politicians of listening more to oil industry interests than to Scripture, common sense or the cries of the poor.

He praised a “less is more” lifestyle, one that shuns air conditioners and gated communities in favor of car pools, recycling and being in close touch with the marginalized.

Francis said he hoped his letter would lead both ordinary people in their daily lives and decision-makers at the Paris UN climate meetings to a wholesale change of mind and heart.

Tagle proposed that Catholics “pay close attention” to the following aspects of the Pope’s encyclical:

Restoration of the contemplative view of creation.

The importance of the belief in the Creator.

Rediscovery of the role of human beings as stewards and not as pseudo-owners of the earth.

God’s plan that the goods of the earth be shared by all.

The vital connection between the environment and human life, and a courageous review of political and economic policies, business practices, mindsets and lifestyles toward the changes needed to care for our common home.

Tagle reiterated the need to “uplift the poor,” as well as “giving glory and praise to God.”

On Wednesday, Lingayen-Dagupan Archbishop Socrates Villegas, president of the Catholic Bishops’ Conference of the Philippines, said the Pope’s letter was not limited to science.

“Some thought [Pope Francis] was venturing into a field best left to scientists…. To search for scientific explanations to phenomena, this is the province and the competence of science and scientists, and while the Church takes keen interest in scientific discoveries and studies, it is not a teacher of science,” Villegas said.

“But the roots of our indifference to environmental and ecological concerns and the sinful dispositions in all of us that make us contributors to the depredation of a world entrusted to our stewardship, these are what scientists cannot teach us,” he said.