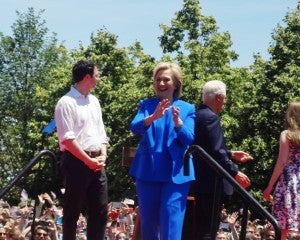 Former President Bill Clinton, without saying a word, joins Hillary after her speech on stage, with daughter, Chelsea, and son-in-law, Marc Mezvinsky. PHOTO BY CAROL TANJUTCO

NEW YORK CITY — Hillary Rodham Clinton could not have picked a better place to kick off her presidential campaign than a historical landmark in her home state, Roosevelt Island, a two-mile island in the East River just across the seat of the United Nations and FDR Drive at New York City.

On Saturday morning, June 13, while the islanders were preparing for Roosevelt Island Day with the usual community fun fare, staging a jazz concert and setting up tables for the event sponsors, the subway station and the tramway were busy bringing in visitors from New York boroughs and out of state. A majority of the guests were young people eager to hear what Hillary Clinton had to say.

Known before as Welfare Island, Roosevelt Island today is one of the most sought-after residential locations for expats and diplomats of the United Nations, with its laid back atmosphere boasting 18th century structures under preservation, where the sun sets against the Manhattan skyline.

All roads led to the Southpoint venue, the Franklin D. Roosevelt Four Freedoms Park, inaugurated not too long ago with former president Bill Clinton himself as a guest. It is the first memorial park dedicated to FDR in his own home state, now open to the public and available for private functions. Named after the famous January 1941 speech of President Roosevelt, the Four Freedoms are now inscribed in its own monument: 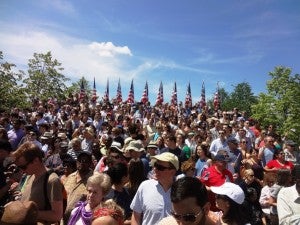 Crowd chanting “Hillary” back of the stage. PHOTO BY CAROL TANJUTCO 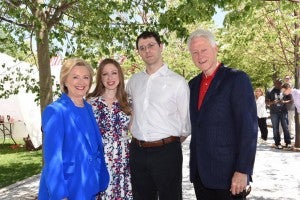 Clinton, who will turn 68 this year, appealed to the young voters and middle income families to support an agenda focused on domestic issues such as the importance of college education, citing how her mother Dorothy Rodham worked as a domestic helper while raising her, and how she herself worked through college babysitting.

Her “state of the nation”-like address picked up from the unfinished work of President Obama, among her goals being continued job growth after the last Wall Street recession, paid family medical leave, equal opportunities for women and the LGBT gay communities.

Interestingly, Clinton stressed the need for “real jobs” as opposed to what the financial institutions have created for themselves, citing the fat bonuses of CEOs and hedge fund managers. She knows this from the inside; her son-in-law Marc Mezvinsky is the founder of a hedge funds group, and her daughter Chelsea was employed by a major New York hedge fund firm, Avenue Capital Group.

Filipino American Democrats have rallied behind Clinton. Leticia Balagot, a retired Veterans Administration nurse, recounted how Clinton fought to save the Veterans hospital from closure due to the lack of federal funds. Personal stories like this, from the Bill Clinton presidency, are giving an added boost to her presidential bid. 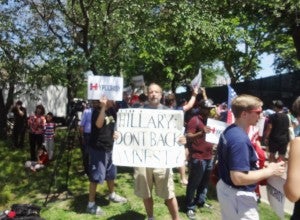 Meanwhile, a small group of anti-Hillary Clinton islanders staged a protest nearby, bearing placards that read “Hypocrisy” and “Hillary Don’t Back Amnesty” (for undocumented immigrants).

Clinton left a warning that “there may be new voices in the Republican choir” but they will be singing an old song, a 1965 Beatles hit “Yesterday,” incidentally on its 50th anniversary this week. She recited the lyrics with a double-edge meaning: ”Yesterday, all my troubles seemed so far away, now it looks like as though they are here to stay … Now, I need a place to hide away!” She ended saying, “You are lucky I did not try singing that too, I tell ‘ya!”