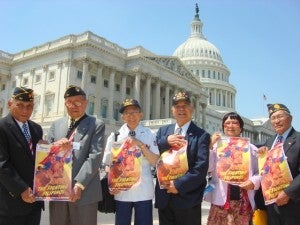 LAS VEGAS — A plan to use money intended for Filipino World War II veterans to pay for a hospital construction in Colorado was rejected by the U.S. Congress, thanks to the efforts of lawmakers from Hawaii, California and Nevada.

The Department of Veterans Affairs had proposed to tap into the $56-million still unspent from the Filipino Veterans Equity Compensation Fund to fill in a $150-million shortfall in the troubled construction of a veterans hospital in Aurora, Colorado.

“That is not acceptable,” said Sen. Mazie Hirono, Dem-Hawaii. Lawmakers secured funding for the hospital from elsewhere, but shielded the Filipino veterans fund from the proposed raid.

The reprieve allowed Hirono and a bipartisan group of lawmakers that included Republican Dean Heller of Nevada to push through legislation that will enable more Filipino veterans to qualify for the benefit.

They encouraged the VA to come up with a fairer plan to extend benefits to more veterans, while in the House of Representatives, Republican Joe Heck of Nevada introduced a bill to reopen the program and allow more veterans to reapply.

In 2009, as one of the first acts of his administration, Obama distributed $15,000 to Filipino Americans and $9,000 to Filipino veterans living in the Philippines as compensation for their services during World II.

Filipinos fought alongside Americans against the Japanese after President Franklin D. Roosevelt commissioned them into the U.S. Army at the start of the Second World War.

Other Filipinos joined guerrilla forces that harassed the Japanese, paving the way for the return of Gen. Douglas MacArthur to the Philippines.

In 1946, however, the U.S. Congress passed the Rescission Act that singled out Filipino veterans as not U.S. veterans and therefore not eligible for most benefits.

The deadline to apply for benefits, however, was set for September 2010, and of the 43,000 claims filed, only 18,929 were approved and considered eligible.

It was either the Filipino veterans, most of whom live in the Philippines, missed the deadline or their names were not on the roster of accepted list provided by the U.S. Army.

This rare win in the U.S. Congress to protect the Filipino veterans fund may finally bode well for the veterans, now in their late 80s and 90s, advocates said.