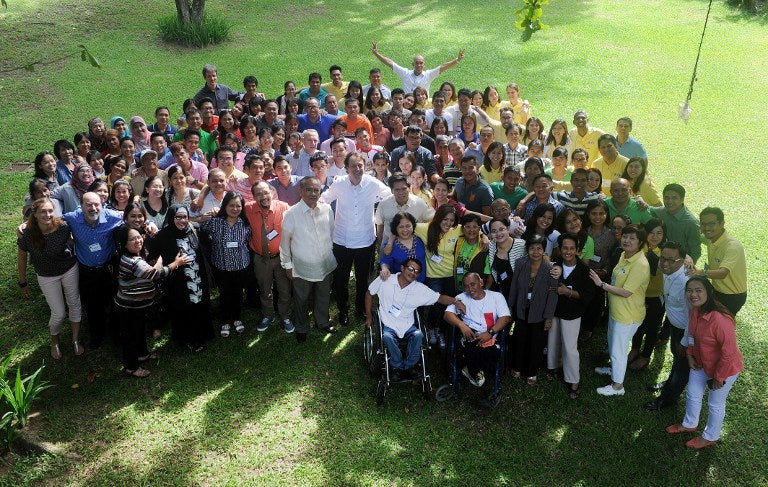 Participants attending a climate debate forum titled “World Wide Views on Climate and Energy” pose for a group photo in Manila on June 6, 2015. From the typhoon-ravaged Philippines to the Arizona desert, thousands of people began gathering on June 6 in small groups in 79 countries for what was touted as the biggest public debate on climate change. One of the first debates was in the Philippines. AFP/JAY DIRECTO

Results of a public consultation showed that the concern of Filipino participants for climate change is higher than the global average.

World Wide Views on Climate and Energy, held last June 6 in 75 countries, showed that 98 percent of Filipino participants were “very concerned” about the impacts of climate change, compared to 78.53 percent of the world average.

Seventy percent of Filipino participants also said that “Climate change is a national priority and it should be,” as opposed to the global average of 43.41 percent.

The World Wide Views is considered the “largest ever citizen consultation on climate change,” involving 10,000 people from 75 countries.

It was conducted on a single day (June 6) starting in Fiji in the Pacific and ending in Arizona in the United States. The participants were “carefully selected for being demographically representative of their countries.

The Philippine leg of the consultation was held at the Seameo-Innotech research facility in Diliman, Quezon City. Among the participants ere farmers, drivers, housewives, street vendors and professionals.

The consultation was jointly organized by the United Nations Convention on Climate Change (UNFCCC), Missions Publiques, the French National Commission for Public Debate (CNDP) and the Danish Board of Technology Foundation.

While only 63.29 percent of the world said nations “should decide in Paris to do whatever it takes to limit temperatures exceeding 2 degrees Celsius warming,” the same statement was agreed upon by 80 percent of the Filipinos.

The percentage of Filipinos who wanted a legally binding agreement on climate change was also higher (87 percent) than the global results (67.72 percent).

The 2015 UNFCCC talks will be held in Paris, France by the end of the year. It aims to achieve a legally binding agreement on how to address climate change, including the reduction of greenhouse gas emissions.

“Many cities, companies and NGOs are voicing their support for a transformational agreement in Paris. The view of citizens is also crystal clear – they see the threats and they see the opportunities: the vast majority want action now, and they want action that is sustained over the long term to bend the emissions down to zero by the end of the century along with support for developing countries for their efforts,” Christiana Figueres, Executive Secretary of the UNFCCC, said in a statement.

Among the global results highlighted by the UNFCC are: