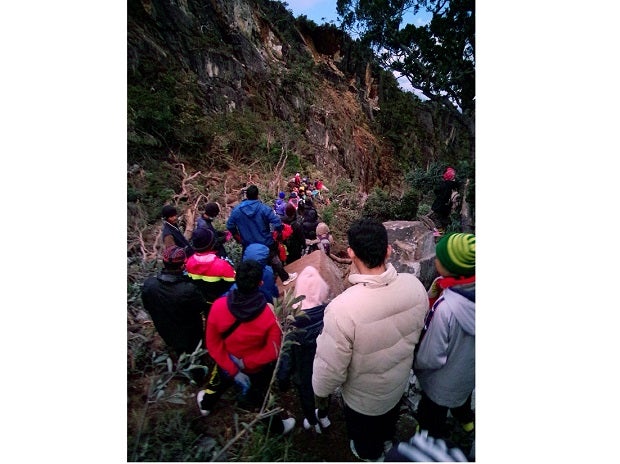 In this Friday, June 5, 2015 photo, climbers trek down the Timpohan Trail with the help of local mountain guides on Mount Kinabalu in eastern Sabah state on Borneo, Malaysia, after the 4,095-meter (13,435-foot) -high mountain was struck by a strong earthquake. Amanda Peter who shot this photo said “The local mountain guides were making sure the path ahead was safe before asking us to walk through. It was very risky and we were all starving, dehydrated and tired. But at least we tried to save ourselves.” AP

KUALA LUMPUR, Malaysia — Rescuers on Malaysia’s highest peak on Sunday searched for six climbers after recovering 13 dead from a strong earthquake that had trapped scores of trekkers. One survivor said she waited for a rescue helicopter that never came.

Nine of the bodies found Saturday were flown out by helicopter, while the other two were brought down by foot, said district police official Farhan Lee Abdullah.

Most of the other climbers made it down the mountain in the darkness early Saturday, some with broken limbs and one in a coma.

Amanda Peter said local guides told her group of 21 climbers that a helicopter would pick them up, but when it did not, they decided to walk after a frustrating nine-hour wait.

“There were risks of us dying up there of cold overnight,” said the 23-year-old Sabah native. “The guide said we either die of waiting or we die trying. So we all chose to try walking down ourselves.”

She said she saw two bodies lying on a flat rock on the way down. “It really affected me as it could have been me. I was lucky to be given a chance to live,” she said.

She said that the descent was “very risky and we were all starving, dehydrated and tired but at least we tried saving ourselves.”

Sabah Tourism Minister Masidi Manjun said in a tweet “it’s easy to pick on weaknesses” of the search-and-rescue operation and “I’m sure they are many.”

READ: Philippines standing by its claim to Sabah – DFA

He said the shortcomings will be examined, but “now is not the time to blame.”

Police said earlier Saturday that they were looking for 17 other people, including eight Singaporeans and one each from China, the Philippines and Japan. The rest are Malaysians. The nationalities of the 11 dead recovered Saturday were not immediately clear.

About 60 rescuers and four helicopters were combing the mountain, where loose rocks and boulders that fell during the quake blocked part of the main route.

The quake also damaged roads and buildings, including schools and a hospital on Sabah’s west coast. It also broke one of the twin rock formations on the mountain known as the “Donkey’s Ears.”

The mountain will be closed for three weeks for maintenance work, and flags will be flown at half-staff in Sabah on Monday to mourn the victims.

Sabah Deputy Chief Minister Joseph Pairin Kitingan blamed the tragedy on a group of 10 foreigners who “showed disrespect to the sacred mountain” by posing naked at the peak last week. He said a special ritual would be conducted later to “appease the mountain spirit.”

The foreigners, who included two Canadians, two Dutch and a German national, broke away from their entourage and stripped naked before taking photos at the mountain peak on May 30, officials have said.

Five of the tourists are believed to still be in Malaysia and will be barred from leaving on the offense of gross indecency, according to police.

Nicolas Doire, spokesman for Canada’s Department of Foreign Affairs, said consular officials in Malaysia have contacted local authorities and are assisting the two Canadians who are among those barred from leaving Malaysia.

Foreign Affairs could not confirm the identity of the Canadians, citing privacy concerns, but Malaysia’s foreign affairs ministry identified them to The Canadian Press as siblings Lindsey Petersen and Danielle Petersen.

Floyd Petersen said he was unaware of the allegations against his son and daughter but said they were travelling through Southeast Asia and had not informed him of the alleged incident.

“Would you tell your parents you did this?” he said from his home in Wood Mountain, Saskatchewan, on Saturday, adding that the pair only called him periodically from their trip. “I don’t have anything to say, I’m just absorbing this.”