Obama’s advice to young PH leaders: Have a vision 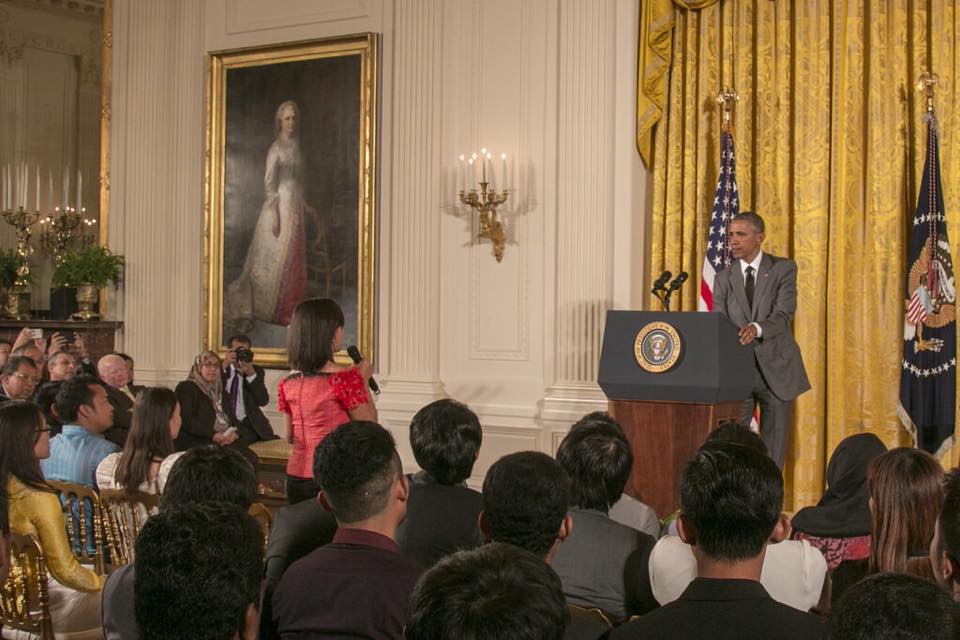 Albay City councilor and Destiny Church-Bicol Pastor Sheina Marie Onrubia enthusiastically throws a question to President Barack Obama, the world’s most powerful leader during the town hall meeting of the Young Southeast Asian Leadership Initiative (YSEALI) fellows at the White House. Back in the Philippines, Onrubia also serves as a pastor sharing her faith in God to thousands of teenagers and helping them become leaders and successful citizens of the country. PAT BARKHUFF

“Have a vision. Stand for something.”

US President Barack Obama offered this advice to young political leaders in response to a question posed by a Tabaco City, Albay province councilor, one of 75 Asians from 10 nations chosen for the Young Southeast Asian Leaders Initiative (YSEALI) fellowship in the United States.

Sheina Marie Onrubia, the young Albay lawmaker, was one of 10 Filipino fellows who joined elected officials, doctors, student activists, journalists, civic leaders and ministry officials from other Southeast Asian nations who were selected based on the impact of their work on their communities.

At the town hall meeting held at the White House in Washington on June 1, Onrubia, 28, asked Obama what counsel he would give budding political leaders and legislators from developing democracies like the Philippines.

“First, don’t be shy,” the US President responded. “You should help people and know what you stand for and what you believe in.”

He added: “Too many politicians (are) just climbing the ladder but don’t know why. (So) when they get there, they’re not very effective leaders (and) become much more subject to the temptations of corruption because all they’re worried about is how to cling to power. And that’s when you lose your way. You have to be willing to lose something for your principles.”

Obama also explained the YSEALI program which he said was meant “to harness the extraordinary potential of youth in the region to address critical challenges and expand opportunities.”

Launched in 2013, the YSEALI is Obama’s initiative to “strengthen leadership development across Asean (Association of Southeast Asian Nations), deepen engagement with young leaders on key regional and global challenges, and strengthen people-to-people ties between the United States and Southeast Asia.”

Fellows come from Brunei, Burma (Myanmar), Cambodia, Indonesia, Malaysia, the Philippines, Laos, Singapore, Thailand and Vietnam, and are provided US and regional educational and cultural exchanges and seed funding, including project grants.

For six weeks since April 25, the fellows participated in activities meant “to expand their skills and network in the field of entrepreneurship and economic empowerment, environment, education and civic engagement.”

Onrubia recalled that aside from meeting Obama, what she relished most was her visit to the Capitol Hill, which houses the US Congress. “As a young legislator, I would like to see the democratic process in action in Washington,” explained this political science graduate from the University of the Philippines Diliman and Senior Pastor of Destiny Church-Bicol.

The strong advocate of teenage health said she had applied for the fellowship to get funding for a health center so it could put up a comprehensive adolescent program.

“It would enable me to empower the youth and develop them into leaders,” she explained.

In October, Onrubia’s US mentor will visit Albay to check on the progress of her work.