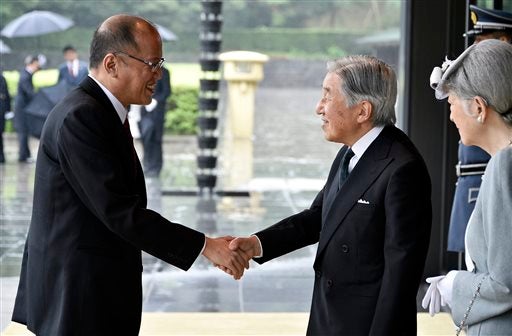 President Aquino, left, is welcomed by Japan’s Emperor Akihito and Empress Michiko upon his arrival at the Imperial Palace in Tokyo Wednesday, June 3, 2015. Akihito told Aquino his country feels “remorse” for its actions in the Philippines during World War II, in what one commentator said was a prod to nationalist Prime Minister Shinzo Abe. FRANCK ROBICHON/POOL PHOTO VIA AP

TOKYO—Japan’s Emperor Akihito has told President Aquino his country feels “remorse” for its actions in the Philippines during World War II, in what one commentator said was a prod to nationalist Prime Minister Shinzo Abe.

Akihito’s role is narrowly defined and he is expected to stay above the fray, so any remarks he makes that stray into the political—however obliquely—are parsed for possible meaning.

In a speech welcoming Aquino to a palace banquet late Wednesday, Akihito noted there were active ties between Japan and the Philippines by the beginning of the 20th century.

“During World War II, however, fierce battles between Japan and the United States took place on Philippine soil, resulting in the loss of many Filipino lives. This is something we Japanese must long remember with a profound sense of remorse,” he said, according to the official English translation provided by the Imperial Household Agency.

“In particular, in this year of the 70th anniversary of the end of World War II, I offer my deepest condolences to all those who lost their lives then,” he said.

His remark comes as Abe prepares a statement he is expected to deliver in August, which is being closely watched for any sign of what critics say is backsliding on previous Japanese apologies.

Abe’s predecessors offered apologies for colonial rule and aggression on the 50th and 60th anniversaries of World War II, but the current prime minister has hinted he is unlikely to repeat that, saying instead he wants to issue a “forward-looking” statement.

That sentiment has caused disquiet among Japanese liberals and anger in China and South Korea, which insist Japan needs to say sorry for its war history.

Akira Hashimoto, a veteran journalist on royal matters and a former schoolmate of the emperor, said President Aquino’s visit had given the nominal head of state “an opportunity to express his opinion” that Japan should squarely admit its past wrongdoing.

The emperor “is striving to have the message heard,” Hashimoto said.

“I believe his majesty wanted Prime Minister Abe, rather than the Japanese people or people in other countries, to hear,” he told Agence France-Presse.

The mass-selling Yomiuri Shimbun noted that Wednesday’s palace banquet was the third for Philippine guests since Akihito ascended to the throne, but was the first at which he had touched on the human cost of the conflict there.

The emperor “has always recognized Japan took wrongful actions during World War II and has felt deep remorse over the tragedies it brought about… His view has never wavered,” the pundit said.