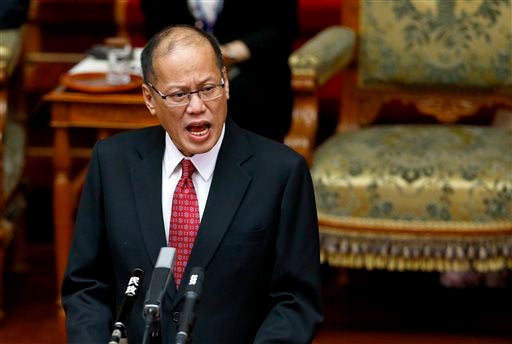 Philippine President Benigno Aquino III addresses the upper house of parliament in Tokyo, Wednesday, June 3, 2015. Aquino is signaling his country’s deepening ties with Tokyo amid increasing concerns by both sides about China’s assertiveness in regional seas during his four-day visit. AP PHOTO

A Chinese Foreign Ministry spokesperson on Wednesday said President Benigno Aquino III should stop with his provocation on the lingering territorial disputes in the West Philippine Sea (South China Sea).

Spokesperson Hua Chunying said in a Xinhua report she opposes Aquino’s comments comparing China to Nazi Germany in regard to the territorial dispute during the President’s address at Nikkei’s 21st Conference on the Future of Asia in Japan.

“I’m shocked about such ridiculous and unreasonable comments and strongly oppose them,” Hua said.

Hua used Chinese history to counter Aquino, saying it was the Philippines that colluded with other nations outside the region and put China on a bad rap.

Xinhua also quoted her as saying that it was the Philippines which “illegally occupied” some of China’s islands in the West Philippine Sea since the 1970s.

According to the Xinhua report, Hua said the Philippines violated its commitment in the Declaration of the Conduct of Parties in the South China Sea (DOC).

Hua said the Philippines should give up the illusion, stop the provocation, and return to the process of negotiation and consultation in handling the territorial row. IDL