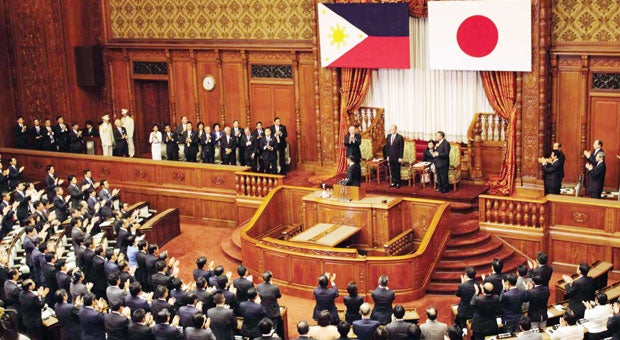 STANDING OVATION Japanese lawmakers rise to give President Aquino extended applause following his 20-minute speech at the National Diet on the second day of his four-day state visit to Japan. Aquino talked about the enduring relationship between the two nations once torn by war. TARRA QUISMUNDO

TOKYO—On the parliament’s podium where his mother once stood as the leader of a new democracy 29 years ago, President Aquino received rousing applause and a standing ovation as he spoke to a nation that has become an enduring ally despite a shared past once torn by war.

Aquino brought the Philippine flag to the Assembly Hall of Japan’s National Diet in an address before its joint session Wednesday afternoon, reiterating the late President Corazon Aquino’s message of friendship to the Japanese people when she made a similar address in November 1986.

It is a rare honor for a visiting head of state to be invited to speak before the Diet, Japan’s “highest organ of state power.”

The President, who accompanied his mother during her state visit soon after the ouster of dictator Ferdinand Marcos, expressed the same positive outlook that the late democracy icon had conveyed to the Japanese parliament.

“In 1986, I accompanied my mother on her own visit to this beautiful country. She said back then: ‘Both of us … look to a future together with hope and expectation. There is a lot we can do together.’ I reiterate that optimism today,” said Aquino.

“Truly, there is much to look forward to, as our continued positive engagement provides anchorage for stability, prosperity and inclusiveness in the region. I look forward to the fruition of a relationship that is now at the threshold of reaching even greater heights,” he said.

Members of the parliament, with Prime Minister Abe in the front row, expressed their appreciation for the message with a standing ovation and extended applause as soon as the President finished.

A near full house of legislators present at the 480-seat bicameral session listened intently to the Philippine leader through simultaneous interpretation in their ear pieces, mostly silent through the 20-minute remarks.

A single interruption for applause came about when the President conveyed his thanks to the Japanese people in their native Nihongo.

“For your support in igniting and sustaining Philippine economic growth, bringing us closer to our goal of an equitable and inclusive society; in helping us recover from disaster and increasing our resilience to vulnerabilities; and in promoting peace and stability in our conflict areas, on behalf of my people, let me say now: ‘Domo arigato gozaimasu,’” Aquino said.

Members of parliament told Philippine officials during an audience with the President later Wednesday afternoon that they were “touched and moved” by his remarks, according to notes from Communications Secretary Herminio Coloma Jr. sent to media.

In his speech, Aquino discussed deepening trade and security ties between the Philippines and Japan, as the two sides continued to see a turnaround in their ties nearly 60 years since restoring official diplomatic relations after the war.

“The War was devastating for all of us; there was bitterness on all sides for the suffering that occurred. However, from its ashes, the relationship between our peoples was reborn like a phoenix,” Aquino said.

As an example, the President cited how Japan had been a major provider of aid for the Philippines, particularly in the aftermath of Supertyphoon “Yolanda” (international name: Haiyan).

“There is no better illustration of this spirit than in the aftermath of Typhoon ‘Haiyan’ (Yolanda), when the Japanese vessel Ise approached Leyte Gulf. The battleship Ise once journeyed to our waters to participate in the largest naval battle of the modern era; this time, a ship bearing the same name brought relief, compassion and solidarity to a people devastated by natural disaster,” Aquino said.

Japan is one of only two strategic partners of the Philippines and the only nation with which it has a bilateral free trade agreement, according to the President.

Japan was the Philippines’ top trading partner in 2014, with total bilateral trade of $19.1 billion. Japan also entrusts its ships to Filipino merchant marines, with 70 percent of Japanese-owned and -controlled vessels manned by Philippine seafarers.

People-to-people links have also increased in recent years, Aquino said. “The Philippines is now the fastest-growing market for Japanese tourism among the Asean member states, while Japan now ranks as my country’s third-largest market for tourists.”

Through Masaaki Yamazaki, president of the Upper House, the parliament recognized the Aquino administration’s gains over the past five years, particularly the country’s growth, noting that the Philippines is an important economic player in the Asia-Pacific.

Aquino is the fourth Philippine President to address the Diet: President Carlos P. Garcia was the first in 1958, followed by Aquino’s mother in 1986 and President Gloria Macapagal-Arroyo in 2002.

Philippine and Japanese flags lined major streets of Tokyo for the President’s four-day visit that began on Tuesday, in what Aquino said may well be his last trip to Japan in his presidency that ends in June 2016.

A highlight of his schedule on Thursday is a meeting with Abe at Akasaka Palace, where the two leaders are expected to tackle issues of mutual concern.