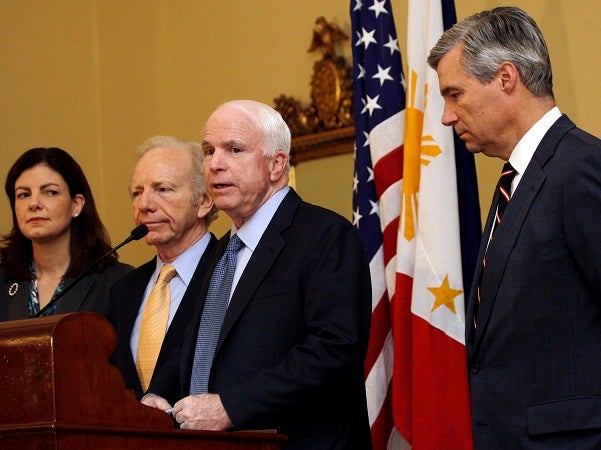 In this file photo, Senator John McCain, R-Arizona, second right, speaks with other Senators, from left, Kelly Ayotte, R-New Hampshire, Joseph Lieberman, I-Connecticut, and Sheldon Whitehouse, D-Rhode Island, during a press conference at the US embassy in Manila during an earlier visit to the Philippines. AP

The United States must work with allies and partners to “impose a greater cost” on China if it continues to increase tensions in the South China Sea, said Senator John McCain, chair of the US Senate Armed Services Committee.

Speaking yesterday on the sidelines of the Shangri-La Dialogue, McCain, who is leading a bipartisan team of senators, said he had written to defense secretary Ashton Carter to not invite China to this year’s Rim of the Pacific (Rimpac) military drill, a major multinational exercise.

The 78-year-old senator, a Vietnam War hero, also said it would be “a serious mistake” for the US if it did not show defiance over Chinese reclamation efforts in the South China Sea by sending its warplanes within 12 nautical miles of the artificial islands that Beijing had built.

BACKSTORY: US says China has artillery vehicles on artificial island

“That will be de facto recognition of Chinese sovereignty over these reclaimed lands, which is actually international waters.”

Still, although tensions in the South China Sea are heating up, an outright confrontation between China and Asean countries can be avoided, “particularly with a united Asean in partnership with the US (to show) the Chinese that this is not a productive exercise they are engaged in”.

His comments come on the back of reports that China placed military hardware on reclaimed reefs in the Spratly Islands. The hardware has since been removed.

McCain added that the US$425 million plan, dubbed the Southeast Asia Maritime Security Initiative, will beef up the maritime capabilities of Southeast Asian countries.

Speaking to reporters separately, Singapore’s defense minister Ng Eng Hen said it would be good if the initiative increases awareness among countries to respond peacefully.

“One hopes that it should not be used to raise temperatures and it has to be done in the context of a framework which still pushes for the peaceful resolution of disputes,” Dr Ng said.