Carter says US flights, sea missions in Pacific will go on | Global News

Carter says US flights, sea missions in Pacific will go on 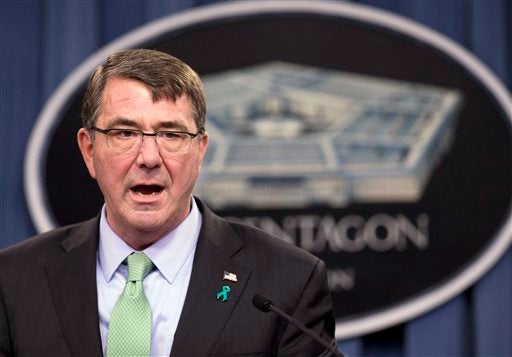 PEARL HARBOR, Hawaii — Defense Secretary Ash Carter strongly defended America’s right to fly over artificial islands that Beijing is building in the South China Sea, but gave few hints ahead of a visit to Asia this week about what the United States was willing to do to halt the construction effort.

Carter responded to Chinese complaints about U.S. military flights over the projects by saying, “There should be no mistake in this, the United States will fly, sail and operate wherever international law allows.”

His comments came in the wake of a formal Chinese protest over the flight last week of a U.S. Navy P-8A Poseidon surveillance aircraft over Fiery Cross Reef, where China is reclaiming land to build an island. Carter’s forceful message signaled a sharp start to his 11-day trip that will take him across the Asia-Pacific region, with stops in Singapore, Vietnam and India.

But Carter did little to clarify what the U.S. is willing to do — diplomatically or militarily — to get China to stop the island construction.

One senior U.S. official said there are discussions about conducting more military flights and patrols in the South China Sea near the projects. Officials also are looking at ways to adjust the military exercises in the region to increase U.S. presence there if needed. The official was not authorized to discuss the options publicly and spoke on condition of anonymity.

One possibility would be for U.S. ships to travel within 12 miles (20 kilometers) of the artificial islands, to further make the point that they are not sovereign Chinese land.

China insists the building is within its rights and has no intention of stopping.

Carter, who spoke during a ceremony Wednesday in Hawaii as Adm. Sam Locklear turned over leadership of U.S. Pacific Command to Adm. Harry Harris, called for an “immediate and lasting halt” to all land reclamation projects by any Pacific nations.

China’s building far outstrips other countries’ efforts, but some, including Vietnam, also have done some land reclamation.

While the U.S. has many disagreements with China, the two nations have worked to improve relations in recent years through increased diplomatic and military contacts.

The Pentagon said in a recent report that the construction — estimated at more than 2,000 acres (800 hectares) — could be used for military airstrips, naval ports or to host surveillance systems. U.S. officials are concerned that China’s land reclamation projects may be a prelude to enforcing a possible air defense identification zone over the South China Sea, similar to one it declared over disputed Japanese-held islands in the East China Sea in 2013.

The U.S. official said there are concerns that China is working to build a perimeter around the South China Sea so it potentially can claim the entire region as its own economic zone, with rights to all the natural resources there.

Read Next
Protest set vs US, China ‘threats to PH sovereignty’
EDITORS' PICK
EDITORIAL: To a bike-friendly future
vivo’s coming to town to grant wishes with more holiday promos
The Best Tech Gifts For The 2022 Holidays
Pagasa: Warm, sunny Sunday in most parts of PH
House energy committee chair Arroyo bats for cheap electricity
Is it safe to talk politics again at family gatherings? ‘The Reconciliation Dinner’ shows us what that’s like
MOST READ
LOOK: Vhong Navarro transferred to BJMP detention facility in Taguig
The Elephant Man in the Senate
Posh village as ‘shabu’ haven
LOOK: Zanjoe Marudo bonds with Ria Atayde, her family
Don't miss out on the latest news and information.