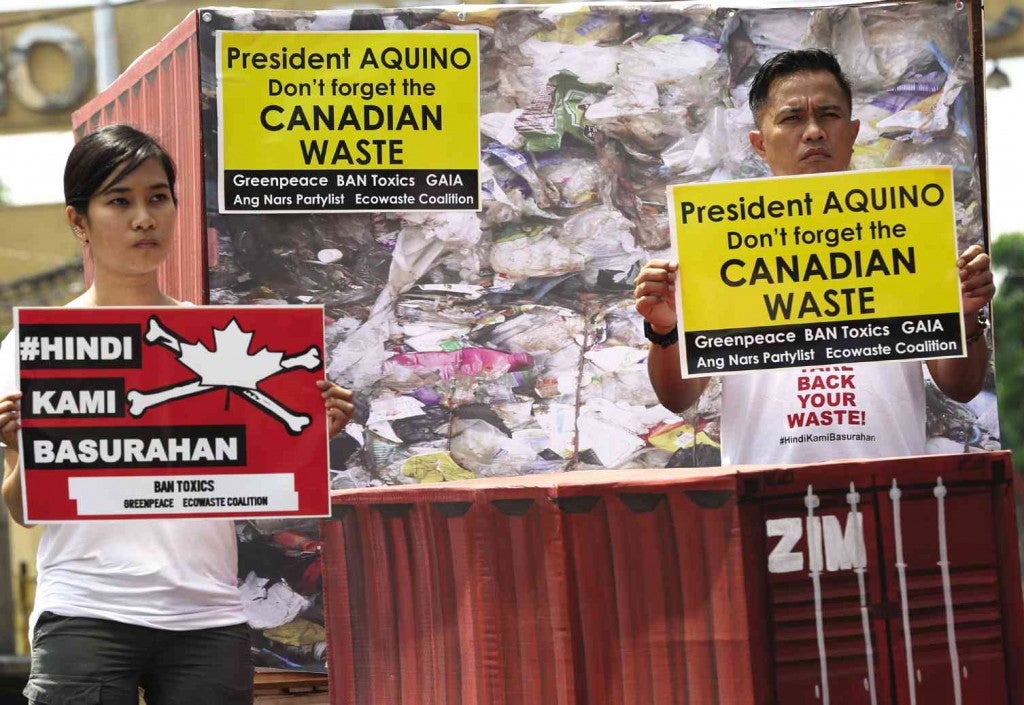 RETURN TO SENDER Protesters tell Canada to take back tons of garbage illegally shipped to a port in Manila from Canada two years ago. NIÑO JESUS ORBETA/FILEPHOTO

AS Canada drew more flak from environmental groups, the Department of Environment and Natural Resources (DENR) said the second batch of trash shipment from Canada should be shipped back outright.

Environmental groups condemned the new shipment after the Bureau of Customs (BOC) discovered that 48 more container vans of garbage have been illegally exported from Canada.

The 48 containers vans of trash that were passed off as plastic scraps arrived in four batches from December 2013 to January 2014, but have since remained unclaimed at the Manila port.

The second batch arrived several months after the first batch of 50 container vans loaded with trash from Canada arrived in six batches from June to August 2013 at the Manila port.

“If that’s the case (that there is a new shipment), they (BOC) should immediately have it shipped back,” said Jonas Leones, director of the DENR Environmental Management Bureau (EMB).

He said the BOC has not yet reported the matter to them officially, but mentioned it “in passing” during their last meeting over the first batch of trash shipment from Canada.

Leones said the EMB did not issue any importation clearance for the second shipment so it was illegal.

He said the 50 container vans exported by the Ontario-based Chronic Inc. was given an importation clearance before arrival on the belief that they contained scrap plastic for recycling.

When the shipment assigned to Valenzuela City-based Chronic Plastics arrived however, the vans were found to contain household garbage with plastic scrap.

“One of the policy changes we made after that episode (with Chronic Inc.), was we told BoC that the applicant should get (importation) clearance 30 days before the shipment. If the shipment is already here, I will no longer issue an importation clearance,” Leones said.

“Then the BOC is empowered and authorized to order the return or confiscation or disposal (of the shipment). The BoC should have it shipped back. That (shipment is) illegal,” he said.

In the past, he said, shipments without the importation clearance from the EMB were allowed to be put on storage while their consignees applied for the clearance.

“But now if there is no importation clearance, they (BOC) should have it shipped back,” Leones said.

Leones said after the problem presented by the Chronic Inc. shipment, he has since denied five shipments of supposed recyclable materials that arrived without getting prior importation clearance.

While the Philippine government has agreed to drop its demand for Canada to get back the illegal trash shipment “for the sake of diplomatic relations,” environmental groups continued to denounce Canada for refusing to take back the trash despite the international treaty against hazardous waste dumping.

“Canada’s callous disregard for international law is simply not acceptable anymore. We warned President Aquino about letting Canada push us around and our agreeing to bury their first illegal shipment on Philippine soil. How long will the Philippines be willing to submit to what is nothing less than waste colonialism,” Gutierrez said.

“We expect nothing less than an open and transparent investigation on this matter, the prosecution of the offenders and the immediate return of the botched garbage consignments to Canada,” she said.

“The authorities must leave no stone unturned to obtain environmental justice for our nation and bring the illegal waste dumping, camouflaged as recycling, to a halt,” Lucero added. SFM/ABC