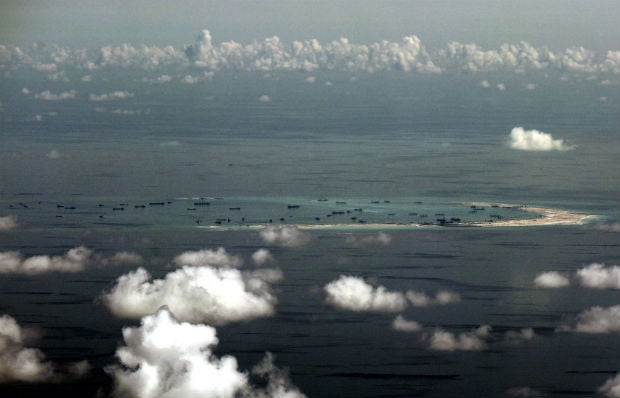 This aerial photo taken through a glass window of a military plane shows China’s alleged on-going reclamation of Mischief Reef in the Spratly Islands in the South China Sea Monday, May 11, 2015. AP FILE PHOTO

China’s reported confrontation with a US military plane in the West Philippine Sea (South China Sea) indicated how it is willing to disregard international laws and freedom of flight and navigation, the Department of National Defense said on Thursday.

“We are still awaiting validation of said incident as reported in international news. Nonetheless, the incident shows the extent to which China is willing to disregard international laws and freedom of flight and navigation,” Defense spokesperson Dr. Peter Paul Galvez said in a text message.

On a patrol mission on Wednesday where news network CNN had exclusive access, the Chinese Navy issued warnings on a US surveillance plane over the disputed West Philippine Sea eight times.

“It is highly regrettable that they are imposing their self-serving rules even in clearly established international airspace,” Galvez said.

A Delta Air flight was also challenged by China at that same time, CNN reported, but its pilot quickly identified himself as commercial and went on its way.

“We have an unconfirmed report that they also challenged a Delta Air flight over the same area. These actions further increase risk of irreparable miscalculations and untoward incidents,” Galvez added.

The Philippines has also experienced the same warnings from China in its air patrols recently.

The mission, aimed at monitoring Chinese activities in the disputed seas, was the first time that Pentagon had allowed media to join in order to increase awareness about the current state of the disputed seas.

The aircraft, a P8-A Poseidon, appeared to have taken off from Clark Air Base in Pampanga based on the video shown by CNN. Jim Sciutto,  the CNN senior correspondent who joined the mission, also went live on air in Manila. AC