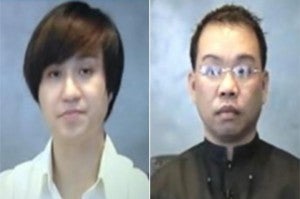 Alfredo-Ruiz and Russel Torralba were sentenced to a year in prison for lewd acts in front of a patient.

SAN DIEGO, California — Two Filipino male former registered nurses were sentenced Tuesday, May 12, to 325 and 365 days in jail, respectively for engaging in sex acts in front of their then 98-year-old patient. Both have lost their nursing licenses.

Alfredo V. Ruiz and Russel Torralba, both 43, pleaded guilty in February to a felony charge of inflicting mental suffering on an elder. Judge Timothy Walsh sentenced both defendants to the maximum custody under a plea bargain and placed them on probation for five years, according to a report by U-T San Diego.

“There was never a true recognition that they had done something wrong to the individual,” said William Berman, lawyer for the victim’s family.

“The video itself is quite disturbing, but there are parts of the video clip where you can actually see [the paitient] raising her hand as if to say enough or stop,” Berman said. The victim, now 102, is doing well, according to Berman.

“On the one hand, my clients are happy that these individuals received the maximum amount of time per our laws, but they’re disappointed that the laws don’t provide for stiffer penalties for acts of abuse or neglect of our elderly,” he said.

While this case clearly sends a message to other nurses and caregivers not to abuse their patients, Berman said this is also an isolated case that should not represent other Filipinos who do excellent work in the caregiving and nursing professions.

Both Torralba and Ruiz were immediately handcuffed and taken into custody at the end of the sentencing hearing.