PH to push boat people back to sea 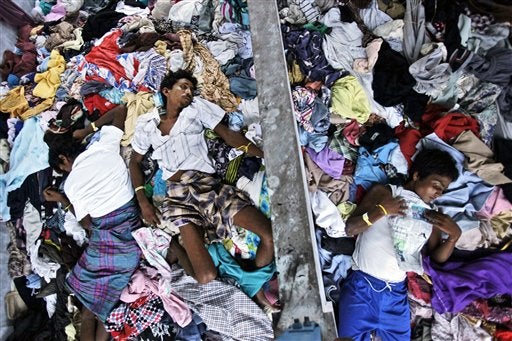 Ethnic Rohingya men take a nap on a pile of clothes donated by local residents at a temporary shelter in Langsa, Aceh province, Indonesia, Sunday, May 17, 2015. Boatloads of more than 2,000 migrants — ethnic Rohingya Muslims fleeing persecution in Myanmar and Bangladeshis trying to escape poverty — have landed in Indonesia, Malaysia and Thailand in recent weeks. The Philippines will push back to sea undocumented Asian “boat people” despite a United Nations appeal to Southeast Asian countries to open their ports to the migrants from impoverished Myanmar and Bangladesh, according to Malacañang. AP PHOTO/BINSAR BAKKARA

Like Malaysia, Indonesia and Thailand, the Philippines will push back to sea undocumented Asian “boat people” despite a United Nations appeal to Southeast Asian countries to open their ports to the migrants from impoverished Myanmar and Bangladesh, according to Malacañang.

But if documented migrant arrivals qualify as refugees or asylum seekers, the Bureau of Immigration will allow them entry, according to Communications Secretary Herminio Coloma Jr.

“Otherwise, we will have to deny admission if they don’t have travel documents,” the head of the Presidential Communications Operations Office told the Inquirer on Sunday.

Hundreds of Asian migrants abandoned at sea by smugglers have reached land and relative safety, said a Reuters report.

But an estimated 6,000 Bangladeshis and Rohingya Muslims from Myanmar, many of them hungry and sick, were adrift in Southeast Asian seas in boats that had been abandoned by smugglers, it said.

There has been a surge in migrants from Myanmar and Bangladesh to Malaysia and Indonesia following a clampdown in Thailand, usually the first destination in the region’s people-smuggling network.

The same report quoted a Malaysian maritime official as saying that after over 1,000 boat people had arrived on the Malaysian island of Langkawi, any more boats trying to land would be turned back as a “political matter.”

In Thailand, authorities were reportedly enforcing a long-held policy to push boat people back to sea. The policy involves giving food, water, fuel and medical assistance to migrant boats but preventing them from landing.

Quoting Immigration Commissioner Siegfred Mison, Coloma said the country’s position on the issue was in accordance with the United Nations Convention on Human Rights.

But the International Organization for Migration has chided Southeast Asian countries for intercepting migrant boats and playing what it calls “maritime ping-pong.”

On Dec. 10, 1948, the Philippines and Thailand, then known as Siam, were the only Southeast Asian countries among 48 nations that signed the Universal Declaration on Human Rights, which obliges UN member-states to promote and observe human rights and freedoms.

But a Coast Guard official, who asked not to be named for lack of authority to speak to media, noted that people on board troubled vessels at sea were normally given food, water and medical assistance by the PCG.

From the mid-1970s up to the early ’90s, the Philippines played host to thousands of Vietnamese boat people who fled their country after the Vietnam War.

From the Philippine Refugee Processing Center in Morong, Bataan, and other refugee camps in the region, the great majority of boat people were resettled in developed countries like the United States, Canada, Australia, Germany and the United Kingdom.

Thousands of refugees were later repatriated to Vietnam, either voluntarily or involuntarily.

The US Department of State, in a statement, urged governments in the region to “refrain from push-backs of new boat arrivals,” as it also called on them to “work together quickly first and foremost to save the lives of migrants.”

Myanmar, Malaysia, Indonesia, Thailand and the Philippines are among the 10-member Association of Southeast Asian Nations.

Bay of Bengal migrant crisis: the boats and the numbers