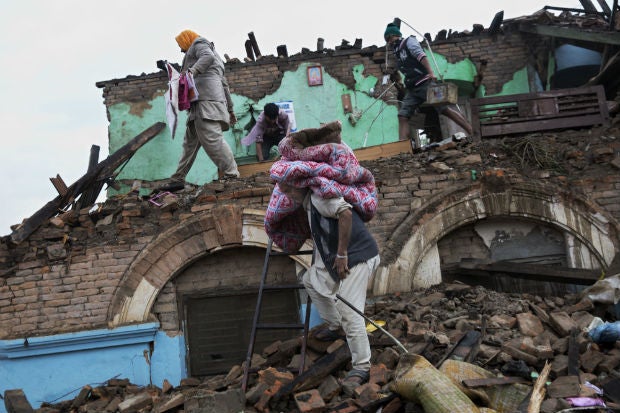 Residents rescue items from debris of a house that was damaged in Saturday’s earthquake in Kathmandu, Nepal, Monday, April 27, 2015. AP

BACOLOD CITY, Philippines—A P20 donation from a fisherman who had lost his wife, baby and everything else to Supertyphoon “Yolanda” started the outpouring of donations from other poor victims of the deadly storm for the victims of the devastating earthquakes in Nepal.

The selfless act of fisherman Rolando Pamplona of Palo, Leyte province, who was the recipient of a fishing boat from Negrense Volunteers for Change (NVC), led to the raising of P74,865.57.

The money that was raised by 242 beneficiaries of NVC’s Peter Project and Project Joseph was turned over by foundation president Millie Kilayko to Consul Paulo Campos at the Nepalese consulate in Manila on Wednesday.

The funds will be used by Nepalese medical students in the Philippines to buy blankets, medicine and food that they will bring to the earthquake victims, Kilayko said.

At the turnover rites, Shaun Khadhka, a Nepali businessman living in the Philippines, said they were truly touched by the donations from the NVC recipients.

“We’re really touched to see you here supporting our country. Thank you from the bottom of our hearts,” he told the NVC volunteers present, aside from Kilayko, Josephine Ruiz, Therese Ng and Noel Tolentino.

Dr. Archana Bajrachnara, a Nepalese dentist and graduate student at the University of the East Ramon Magsaysay Medical School, detailed the extent of the earthquake damage, and Campos explained how to send relief to Nepal.

Kilayko said the donations came from recipients of NVC fishing boats and livelihood projects in Samar, Leyte, Biliran and Negros Occidental. Inspired by their act, NVC volunteers and staff pitched in, and so did some of their friends, she said.

“What we have to give you is not much, but there is something I can tell you, and vouch for. I have been to most of the places where your donors come from. I have seen these donors face to face.

“I have looked them in the eye. I have seen them poverty-stricken, owning so little, oftentimes lacking much, and many times even going hungry.

“I know that even the smallest of donations was an amount so precious, so needed, by their own families,” she said.

Kilayko said their act of kindness had not gone unnoticed.

She said that shortly before the turnover, she learned that Cebuana Lhuillier Microinsurance had committed to provide the 242 donors with P20,000 accidental death and disablement insurance and P5,000 fire cash assistance each for a period of four months.

“If they paid for the premium, that would have cost them P25 each. Clearly, the P20 donation of Rolando Pamplona, the first fisherman donor, has been rewarded a hundredfold,” she said.

Tagle appeals for donations for quake victims in Nepal

UNICEF calls on Filipinos to donate for Nepal quake response