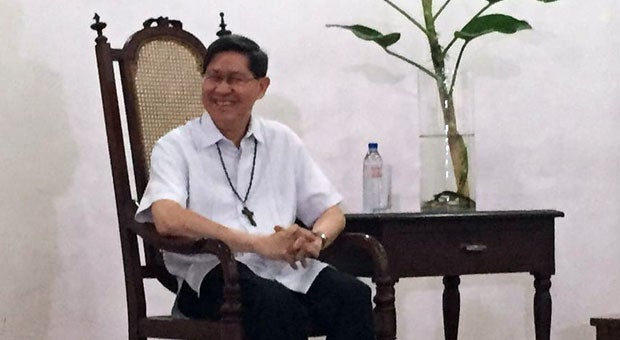 The world can learn from the Filipinos’ experience of survival, resiliency and steadfastness of faith with the election of Manila Archbishop Luis Antonio Cardinal Tagle as president of Caritas Internationalis, a confederation of global Catholic charities.

“He came from the Philippines that is a disaster corridor in this part of the world. He represents Third World that experienced the brunt of calamities, both manmade and natural,” Fr. Anton Pascual, executive director of Caritas Manila, said of the cardinal.

“His heart is with the poor, he speaks their language, breathes their aspirations and can discern God’s will that will resonate for mercy and compassion,” Pascual said.

Tagle, 57, was elected by Caritas delegates from around the world at the second day of their general assembly in Rome on Thursday. He also chairs Caritas

Caritas Internationalis is a confederation of Catholic charity organizations operating in some 200 countries.

As the new head of Catholic Church’s global charity and development confederation, Tagle is expected to strengthen the alliance’s works in the light of serving the most vulnerable and in living out charity and justice throughout the world.

According to Fr. Edu Gariguez, Caritas Philippines executive secretary, Tagle was supported by all countries in Asia, earning 91 out of the 133 votes by Caritas member countries.

Tagle failed to appear before the assembly as he was still in the United States receiving another honorary doctorate from a theological school, said Gariguez.

“But he is expected to join the Caritas confederation of 165 members on May 16 to formally assume his position,” the priest said.

According to a post on the Caritas Internationalis website, Tagle addressed the assembly delegates through a phone call from Chicago.

“Buona sera a tutti (Good evening, everyone)! Thank you for your trust,” Tagle said. “I’m limited in my capacities but with all of you, with the love that Jesus has poured into our hearts and in the name of all of the poor people in the world, I accept this election.

“Let us together strengthen the church of the poor so our witness can help guide us to a world of understanding justice, true freedom and peace.”

Lingayen-Dagupan Archbishop Socrates Villegas, Catholic Bishops’ Conference of the Philippines president, said it was not surprising that Tagle was chosen to head the confederation.

“Cardinal Tagle is a gift of the church in the Philippines to the world. He is a blessing everywhere he is sent. We are very happy and proud,” said Villegas.

Gariguez said Tagle “has the qualities of a good leader for the organization.”

“His pastoral zeal and leadership will certainly challenge the organization to strengthen its commitment of serving the poor and the vulnerable,” Gariguez said. With a report from AP