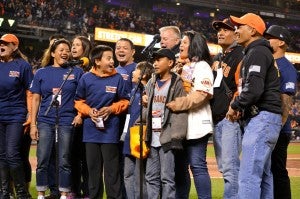 Filipino members of the SF Fire Department and their families sang “Take Me Out to the Ballgame” during the 7th Inning Stretch. PHOTO BY TRACEY FELIX

SAN FRANCISCO — Another successful Giants Filipino Heritage Night (FHN) at AT&T Park was held on May 8th, thanks to the collaboration between the Filipino American Arts Exposition (FAAE) and the San Francisco Giants professional baseball team.

FAAE presented cultural entertainment especially for the game between the SF Giants and the Miami Marlins. The pre-game showcase at O’Doule Plaza featured a Filipino mural by the Pilipino Street Art Project, a new Filipino-music mix by DJ Anthony and amazing hip-hop dance moves by Tic Tac Tix.

The opening ceremonies began with a presentation by American Center for Philippine Arts. Its Filipino cultural demonstration was an authentic T’boli , from one of the indigenous peoples of Southern Mindanao.

The 7th Inning stretch featured a rousing rendition of “Take Me Out to the Ballgame” by Filipino firefighters and their families.

“Filipino Heritage Night continues to be a great opportunity to bring our community together and showcase Philippine culture, music and dance,” said Al Perez, president of FAAE.

“It’s like a large community reunion, and it’s so much fun to reconnect with people that we have not seen in a long time. And it gives me great pride to see local Filipino performing artists being featured and appreciated in such a large, mainstream venue as AT&T Park,” Perez added.

During the game, fan favorite Fil-Am player, Tim Lincecum pitched in his finest form, which resulted in six shutout innings. Giants infielder Casey McGhee was able to hit a grand slam in the second inning, which shook the Marlins throughout the rest of the game. The final score was SF Giants 6, Miami Marlins 0.

“We had a great program highlighting Filipino culture and a great Filipino American, Tim Lincecum, pitched a great game for the Giants.  It was a perfect night all around,” Ting added.

The sold-out game recorded 2,618 people in special event attendance. The FHN giveaway was a commemorative Tim Lincecum bobble-head, celebrating his two no-hitters during the 2014 season.

“I thank the SF Giants’ franchise for giving us the opportunity to project the best of our Filipino culture through the SF Giants’ Filipino Heritage Night celebrations,” said Philippine Consul General Henry Bensurto.

“Connecting the Filipino community, which is the largest Asian ethnic group in California, with other communities is one of our main thrusts at the Consulate and initiatives such as the Heritage Night celebrations contribute significantly to the realization of this objective,” Bensurto said further. “I am sure the importance being given by the SF Giants to our community will continue to strengthen and expand the SF Giants fan base among the Filipino Community in the Bay Area.”

The second Giants FHN of the season will be held on Tuesday, Sept 15, when the SF Giants will take on the Cincinati Reds. Call (415) 972-2298 or click www.SFGiants.com/SpecialEvents to secure your tickets now, before they are sold out.