Del Rosario said that the Philippines remains supportive of the United State’s so-called pivot to Asia and called for its robust execution.

The Philippines’ secretary foreign affairs attended the unveiling of the US-Philippines Strategic Initiative (USPSI) May 12, at the Center for Strategic and International Studies (CSIS) in Washington, DC.

The US-Philippines Strategic Initiative, a joint project by CSIS and the ADR Institute, aims to strengthen the two countries’ alliance “through sustainable and strategic engagement on high-impact global and regional issues.”

It is expected to produce policy recommendations that would enable the Philippines-US alliance to effectively deal with current political and economic realities.

Del Rosario lauded the effort in his written remarks, describing it as “deliberate, timely and time-bound.” 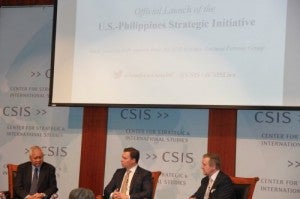 “At the core of this Initiative is the realization that the United States must remain an active player in strengthening the regional architecture for stability, security and development. The Philippines, in turn, contributes to and has an important role to play in maintaining that regional stability,” del Rosario emphasized.

The Philippines is the oldest treaty ally of the United States in Asia. In recent years, the two countries have been reinvigorating their bilateral relations within the context of the US “rebalance” in Asia policy and in light of new issues that have far-reaching implications for the region’s security and progress.

Among these issues are the maritime disputes plaguing the region, including those that concern the South China Sea.

Del Rosario stressed that, “The goals of the US and China are so diametrically opposed, the outcome of the contest is capable of impacting international order.”

He also underscored the economic and people-to-people ties that bind the Philippines and the United States as strongly as their cooperation in the field of defense and security. The Philippines is advocating a peaceful settlement of the disputes.

The audience of around 150 people included CSIS fellows, Philippine and US government officials, members of the diplomatic corps and media representatives. Del Rosario was joined on the panel by William Cohen, chairman and CEO of The Cohen Group, a global consultancy firm. Ernest Bower, Sumitro chair for Southeast Asia Studies and co-director of the Pacific Partners Initiative at CSIS, moderated the discussion. 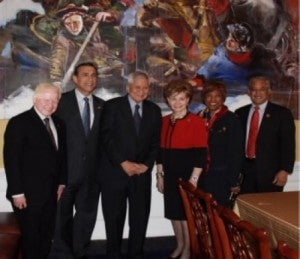 Foreign Affairs Secretary Albert F. del Rosario (third rd from left) and Philippine Ambassador to the US Jose L. Cuisia, Jr. (leftmost) with some members of the US-Philippines Friendship Caucus on May 12 at the Capitol.

Del Rosario last visited CSIS in September 2012 during the “The Philippines Conference.”

Del Rosario proceeded to a reception in honor of the US-Philippines Friendship Caucus in the US Capitol. He reiterated to US legislators the vital role of the Philippines-US alliance in preserving peace, stability and prosperity in the Asia-Pacific.

He then briefed the Caucus members on Philippine issues, including the recent developments in the South China Sea, the post-Haiyan rehabilitation and rebuilding efforts and the status of the Filipino communities across the US.

“It is through the tireless efforts of the US-Philippines Friendship Caucus that bilateral relations gain more meaning and relevance to peoples’ lives,” he remarked.

Del Rosario separately met with US Senators John McCain and Bob Corker May 11, as part of his two-day visit to Washington, D.C. He thanked the two legislators for their leadership in pursuing continued dynamic engagement with Asia and reiterated the Philippines’ support for the US rebalance policy. He also encouraged the forging of bipartisan cooperation in the US legislature with regard to the urgent need to address the worsening situation in the South China Sea.

“Our relationship with the United States remains a cornerstone of our foreign policy. It is critical that both our countries continue to work together to maintain the dynamism of our alliance,” Del Rosario said.

Del Rosario and Blinken discussed the US rebalance policy towards the Asia-Pacific region. They also exchanged views on recent developments in the South China Sea, which have direct implications for regional peace, security and stability

How Twitter reacted to reports of Kobe Bryant’s death