The 1.3 kilometer dilapidated airstrip called Rancudo airfield needs improvement since both of its sides have slowly eroded in recent years.

“It’s quite a short runway so it only justifies that we have to improve this runway because it is very difficult to land,” Catapang said. 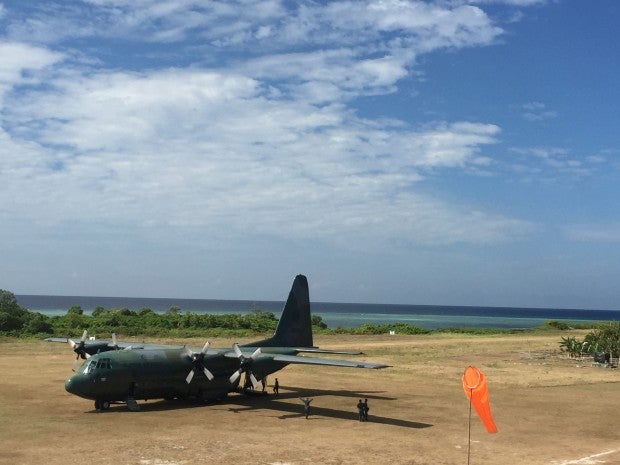 An Air Force official said big planes such as the C130 transport plane could make landings in airstrips like Rancudo, but a longer runway would also mean better safety margin.

“It also helps that our Air Force pilots have become proficient,” he said.

A longer runway would also let planes abort take offs when there is a need.

So far, there have been no recent cases of Air Force or Navy planes overshooting the runway in Pag-asa.

Catapang’s visit in the West Philippine Sea (South China Sea) was a first for a military chief in recent years, and Catapang is the first AFP chief to do so under the Aquino administration.

Pag-asa (Thitu) Island is the biggest of the nine occupied territories of the Philippines. It is the second largest in the whole of Kalayaan Island Group (Spratlys).

Catapang’s visit also comes at a time when China is aggressively pursuing its reclamation activities in the disputed seas.

China has been reportedly doing massive construction activities in at least seven areas in the disputed seas.

The Philippines has stopped its reclamation activities in the West Philippine Sea to maintain its moral high ground in the arbitration case it filed against China. A ruling is expected next year. CC

Another village chief gunned down in Nueva Ecija