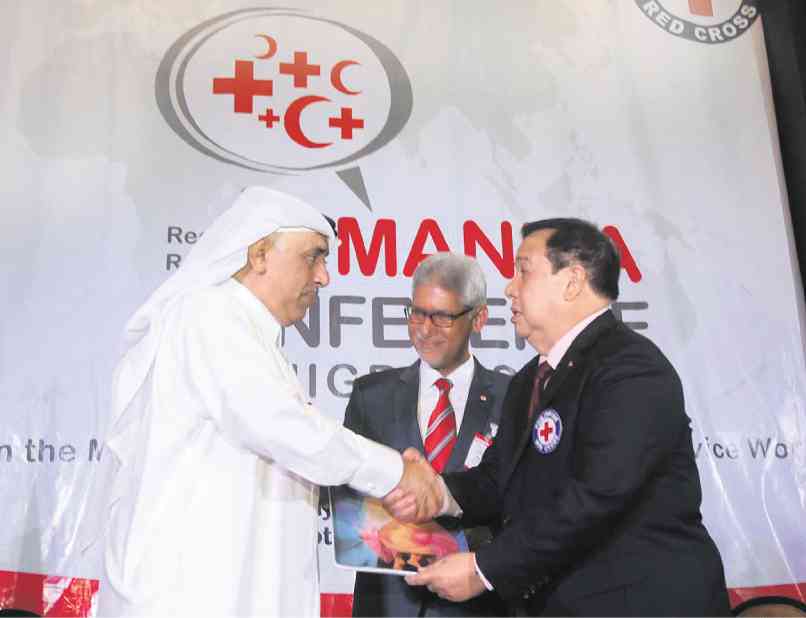 Alarmed by the growing number of cases of abuse, neglect and manipulation of migrant workers globally, the Philippine Red Cross is calling on its counterparts worldwide to draft concrete measures that would make them a proactive player in this global issue.

Philippine Red Cross chair Richard Gordon said the Red Cross and Red Crescent societies in all parts of the world must be proactive in dealing with the plight of migrant workers, especially women domestic helpers who are the most vulnerable people in the trade.

“We should use the great power of the movement to talk regularly and to establish protocol so that we could help distressed migrant workers quickly,” Gordon said at the launch yesterday of the Manila Conference on Migration 2015, which focuses on the most vulnerable: women household service workers.

Gordon said the issue of helping migrant workers becomes even more relevant in the wake of Mary Jane Veloso’s story of allegedly being deceived to work as a drug mule, leading to her arrest in Indonesia in 2010 after she was found carrying heroin in her luggage.

“It is fortunate that we were able to get a temporary reprieve for (Veloso), who was deceived thinking she would go as a migrant worker, but was given a suitcase that turns out contained drugs. We don’t tolerate that, but it shows you that when you have persons without proper education, they become a target of opportunity,” he said.

Gordon said there are now about 52 million female domestic workers worldwide, 1.2 million of whom are Filipinos. Aside from being preyed on by fixers and illegal recruiters, domestic workers face the probability of being abused or neglected by their employers, with no one immediately available to help them.

“The number of migrant workers, especially women household service workers, has become so significant. The problem has become so big that we have to start where we can win. We can’t turn a blind eye and just be bystanders in what’s happening,” Gordon said. “This is a travesty that has to be faced up to.”

Delegates to the conference are expected to come up with measures that would ensure proper coordination between Red Cross and Red Crescent societies in different countries, with the aim of helping migrant workers as soon as possible.

“This conference will bring together Red Cross and Red Crescent Societies from sending and receiving countries with the aim of establishing protocols that would guide the Red Cross Movement in extending assistance to women migrant workers,” Gordon said.

Specifically, Gordon is proposing that member societies establish call centers, which migrant workers, their colleagues, or relatives back home, can contact in cases of emergency.

“They can call us, and we, in turn, can coordinate on how best to help them,” Gordon said.

Finally, he noted that the conference aims to urge Red Cross and Red Crescent societies to engage in diplomacy that would promote better working conditions for migrant workers.

“We should influence governments through humanitarian diplomacy, with the aim of bringing about a change in attitude that would make sure these workers are protected. When migrant workers are protected, they will treasure the opportunity to work. Then we will have less problems: less assaults on women, and less people in jail,” Gordon said.

He noted that the Red Cross had done its part in helping Veloso through backchannel talks with Indonesia.

“Indonesia’s vice president, Jusuf Kalla, is the president of the Red Cross there. He has helped us with this case. It’s a testament to the strength of our network,” Gordon said.

He added that it was now up to the government to prove that Veloso was only a victim of a drug trafficking syndicate in the hope of commuting her sentence.

“We better have a good case that she was really duped. It takes strong evidence that we should provide to show she wasn’t part of it. And we have to show it convincingly,” Gordon said.

He lamented that Veloso was a victim of her circumstances, of desperately needing to feed her family and in doing so, falling into the trap and being trafficked.

“If she had the proper training and education before she left, if she was given more opportunities than the pre-departure orientation seminar, if she was given a cultural immersion, this would not have happened,” Gordon said.