SAN FRANCISCO — A new study shows that by 2040 the Asian American electorate will more than double in size, growing by 107 percent.

That’s faster than the expected growth of the Asian American population during the same period, which is expected to increase by 74 percent, according to the report released by the UCLA Study for the Center for Inequality and the Asian Pacific American Institute for Congressional Studies (APAICS). 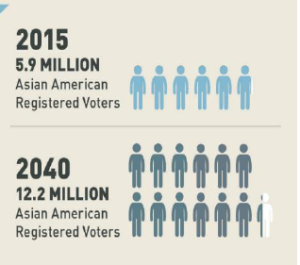 The study comes 50 years after the passage of the Immigration & Nationality Act of 1965 and the Voting Rights Act of 1965.

FEATURED STORIES
GLOBALNATION
Lorenzana to China on BRP Sierra Madre: ‘What commitment?’
GLOBALNATION
No peace if the strong continues to trample on the weak, Duterte tells leaders’ summit
GLOBALNATION
PH warned vs China treachery as Filipinos’ eyes glued to polls

“Our report finds that in 2015, there are 20.5 million Asian Americans, and a quarter of a century from now, 35.7 million,” said Paul Ong, director of the UCLA Center on the Study of Inequality, who was quoted by Asamnews.com.

“In 2040, nearly 1 in 10 Americans will be Asian American. During the same period, the number of Asian American registered voters will increase from 5.9 million to 12.2 million,” he added.
According to Elena Ong, the report’s co-author, “In 2040 the Asian American electorate will be different from the one you see today.” She calls this a “multigenerational transformation”; 47 percent will be younger and U.S. born; 53 percent will be older and foreign born. 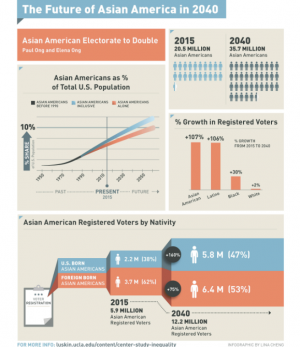 “It has been only recently that researchers have included Asian Americans in the coalition paradigm. The possibility of [inter-ethnic] coalition politics is highly dependent on the issues at play, the composition of the Asian American population in question and, ultimately, the articulation of an Asian American political agenda,” Gilliam explained.

Don Nakanishi, professor emeritus and director emeritus of the UCLA Asian American Studies Center, also pondered how these trends would play out.

“Three scenarios could challenge or disrupt an optimistic view of the political future for Asian America during the 25 years leading up to 2040 — class [differences], partisan skirmishes and controversies and America’s color line,” he said.

The report, which is the first in a series of publications on the future of AAPIs, presents projections of the Asian American population to 2040, with a focus on the electorate.