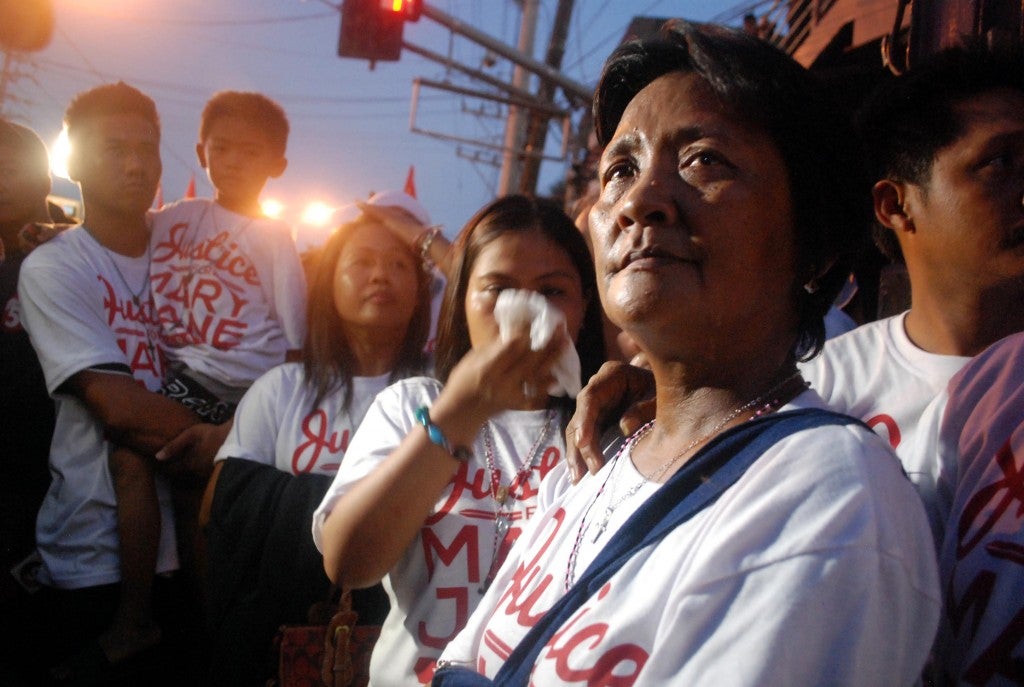 THE family of Filipina maid Mary Jane Veloso has belied the contents of the timeline issued by the Department of Foreign Affairs about its efforts to save her from the death row, and detailed the government’s “serious neglect” from the very beginning.

“Most of it was not true. Help from them (government) came much later,” said Maritess Veloso-Laurente, the elder sister of Mary Jane, in a recent interview with Philippine Daily Inquirer editors and reporters.

She was referring to the timeline that the DFA had issued amid the blame-game and credit-grabbing that followed after Mary Jane’s last-minute reprieve on April 28.

According to the DFA’s timeline, the Philippine Embassy in Jakarta received a letter from the Indonesian Police Directorate on Narcotics on May 6, 2010 about the arrest of the Veloso a week earlier.

Veloso, who was 25 then, was arrested at the airport in Yogyakarta, Indonesia, after she was caught with 2.6 kilograms of heroin in her luggage. She claimed she was duped by her god-sister and recruiter Maria Christina Sergio, also known as “Tintin,” who promised her a job in Indonesia.

The Philippine embassy, the DFA said, immediately sent a note verbale to the Indonesian Foreign Ministry to obtain a status report of the arrest and to the DFA Office of the Undersecretary for Migrant Workers’ Affairs (OUMWA) confirming the arrest of Veloso.

“(On May 26, 2010), the DFA endorsed to the Philippine Embassy in Jakarta the request of Ms. Laurente and requested Jakarta PE to send updated developments on the case,” the DFA said on the copy of the timeline.

The DFA detailed the exchanges between the Philippine Embassy in Jakarta and the DFA in Manila and the Indonesian officials on Veloso’s case from May 27 to July 22 in 2010.

On July 29, 2010, during a visit of the embassy representatives in the Yogyakarta prison, they and Veloso were able to speak to her mother Celia in the Philippines over the phone, the DFA said.

Based on the DFA’s timeline, embassy representatives were present in all the hearings of the case and had even met Veloso’s “pro-bono lawyer” and the public prosecutor handling the case.

On August 4, 2010, the DFA wrote Laurente and Mary Jane’s former husband Michael Candelaria about their jail visits and the court hearings of Mary Jane’s case.

But Laurente said these information from the DFA were all falsehoods as they have learned about the arrest through Mary Jane herself only on May 12.

She said Mary Jane over the phone told her family that she was in jail, narrating them her ordeal upon her arrest.

A day after learning her arrest, Mary Jane’s family went to Mary Jane’s recruiter Sergio in Talavera in Nueva Ecija.

Laurente said they were told not to tell what happened to Mary Jane to anyone and never approach the government and the media for she could work on her release even if that would cost her millions of pesos.

Confessing she was a member of an international syndicate, Sergio at that point warned them that their lives and that of Mary Jane would be in danger if they broke their promise, Laurente said.

“We heeded Tintin’s warning for three months. We were so afraid we would be killed one by one,” Laurente said. Laurente could not forget Sergio’s words at the time: “Ang dami ko nang napalusot bakit kinakapatid ko pa (I managed to help others slip out undetected, why not my god-sister?)”

“We never got any call from the government during this period,” Laurente said when asked about the supposed calls from the DFA and the Philippine Embassy in Jakarta

Contrary to the DFA’s claim, it was only by August when the Velosos decided to seek the government’s help.

“Since August 2010, we often traveled back and forth to the DFA to ask for their help. We were told by Patricia Jean Oliver Macam that she would be given a lawyer and that they will provide financial assistance,” Laurente said.

Since then, they would look for Macam, a certain case officer at the DFA’s Office of the Undersecretary for the Migrant Workers’ Affairs (OUMWA) in Manila.

But every time Mary Jane’s family would follow up the case with the DFA over the phone, those at the end of the line would just said Macam was somewhere else either on a business trip or on vacation.

There was no news until October 11, 2010, when the District Court of Justice of Sleman in Yogyakarta sentenced Mary Jane to death.

The Philippine Embassy in Jakarta afterward tapped Rudyantho and partners to handle Mary Jane’s case, prompting a disbursement of USD$5,000.

Another incident in which the Velosos accused the DFA of neglect was when the family was supposed to travel to Indonesia to visit Mary Jane in 2013.

In April 2013, policemen, jail officers and inmates at the Yogyakarta jail pooled money amounting to P82,000 so Mary Jane’s parents and her eldest son Mark Danielle could buy plane tickets and visit her in Indonesia.

The Velosos again sought the help of Patricia of DFA who promised them she would help in the processing of their passports.

But a month had gone by and the Velosos began to feel the urgency to travel to Indonesia.

Celia Veloso said they turned to officials in Pampanga “who had connections with the DFA” to help them get their passports.

In a week’s time, they got a call telling them that their passports were done. “We were told that the DFA in Manila was trying to withhold our passports. But after learning that we would be the ones shouldering the travel costs, the DFA finally allowed us to travel,” Celia said in Filipino.

Celia said she could not understand the attitude shown by the DFA particularly Patricia who tried to discourage them from going by saying: “They (authorities) would not allow you to travel without a letter of invitation from Indonesia.”

Asked by Patricia how much was their pocket money, Celia answered P20,000 even if she didn’t have that amount of money yet.

“Patricia replied ‘Where did you get that money?'” Celia said quoting Patricia.

Laurente said Patricia later apologized to the Velosos after learning that the inmates and police officers in Indonesia would be the ones to shoulder their travel to visit Mary Jane. 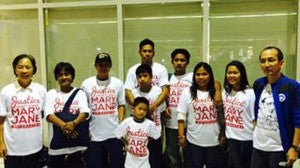 The Velosos stayed in Indonesia for a month and were able to see Mary Jane in prison on a daily basis.

“I began to ask myself then why the DFA would want to prevent us from going there?” Celia said.

The Inquirer tried to verify these claims regarding “Patricia Macam” of the DFA who was said to be posted now at the Philippine Embassy in Singapore, but Charles Jose, spokesperson for the DFA, has not responded to the question.

The Velosos and Mary Jane’s private counsels from the National Union of People’s Lawyers (NUPL) believe that events would have taken place differently had the government done its job early on.

“Had they handled the case of my daughter well, she would have been free by now,” Celia said.

Edre Olalia, NUPL secretary general and one of the lawyers with Mary Jane in Indonesia prior to the scheduled execution, the Philippine government should have invoked the Palermo protocols against human trafficking, which were adopted by the United Nations in 2000.

Under the protocols of which Indonesia and the Philippines are both signatories, every human trafficking victim must be protected.

“She should have been brought back home before she was tried and convicted,” Olalia said noting that Indonesia had counterpart laws supporting such provision in the UN protocol.

“The state’s immediate reaction should be repatriation,” Olalia said.

The Philippine government did not respond to the request of the Indonesian lawyers handling Mary Jane’s case to file charges against her recruiter Sergio to bolster the case appealing her death sentence.

The Velosos sought the help of the Philippine Drug Enforcement Agency after the death penalty sentence was meted out on Mary Jane. But PDEA turned them down saying there was no sufficient evidence to pin Sergio down.

“The mere fact that Indonesian President (Joko Widodo) considered her as victim, we believe he would eventually be moved to exercise his power of clemency,” Olalia said.

“All these we experienced because of the neglect of our government,” Celia said.

The Velosos, however, do not discredit the fact that President Aquino wrote clemency appeals to the previous and present Indonesian presidents for the commutation of Mary Jane’s death sentence.

But it was not too easy for them to be grateful after their ordeals, Celia said.

Migrante, the group earlier accused by irate netizens of “brainwashing” the Velosos, came in the picture on March 26, 2015.
“They looked for us in Cabanatuan after seeing us on TV,” Laurente said.

Mary Jane has not been identified in previous news reports and government pronouncements until the execution became imminent and the international campaigns to spare the lives of the foreign death-row convicts in Indonesia intensified.

Migrante has been providing a half-way home for the Velosos while they are in Manila to follow up the case.

“They helped us a lot in making our calls heard,” Laurente said.

In answering the claims of the Velosos, the DFA had repeatedly said it had done everything it had to do to save Mary Jane.

“The Department of Foreign Affairs had consistently been updating the public of the Philippine Government’s efforts, from providing legal assistance, undertaking representations at the highest levels of the Indonesian Government to coordinating prison visits of Mary Jane’s family, including covering their cost of travel,” the DFA said in its recent statement. SFM/AC