A doc is a pet’s best friend

First posted in PositivelyFilipino.com (As “A Pet’s Best Friend”) 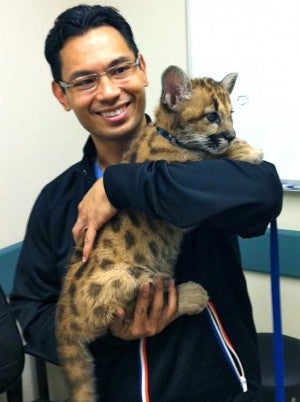 Dr. Michael Mison and one of his patients. CONTRIBUTED PHOTOS

SEATTLE, Washington — When Caochi, my pet lhasa apso, could not eat and was throwing up all night, I was distraught, looking for proper treatment. My husband and I had to take her to two vet clinics before we were referred to a specialty hospital (Seattle Veterinary Specialists) where we found Dr. Michael Mison. He had to perform gall bladder surgery on my little dog. His assistant comforted me, saying, “Your pet is in excellent hands.” In fact, she added, “I would let Dr. Mison operate on my child if I had one.”

My little girl was good as new a few days after the surgery.

Dr. Mison, to me, was the savior of my beloved pet. He’s a superb doctor who was kind and understanding of what my pet meant to our family. I realized later that he was a “kababayan,” making me proud to link up with a respected representative of our heritage.

After more visits, I got to know Michael Mison, his family background, how he came to be a vet, and his passion for caring for animals.

He came from a family well known for public service, and all his siblings are high achievers and successful in their own right. His grandparents were teachers; his mother was a sociology professor at the University of the Philippines. His father, Salvador Sr., served 32 years with the Philippine Armed Forces; his brother, Salvador Jr., followed suit and earned his stars as major general. Another brother, Siegfred, studied Law (Ateneo and Masters in Law in University of Southern California) and graduated from the US Military Academy at West Point; he is currently Commissioner of Immigration. All family members in the Philippines are patriotic to the hilt and would not conceive of a permanent life outside the homeland.

Michael came to the US when he was 13, following his sister, Ione. The two other sisters eventually emigrated to the US — now Irene, is a medical doctor (UP, internship at Mt. Sinai in Baltimore and residency at Johns Hopkins) and currently director of Integrative Medicine at the University of Florida; Melinda is a financial analyst (UP Economics and MBA at University of Chicago) and Ione (Maryknoll and University of Central Florida) is an accountant.

Belonging to a notable family of professionals, the pressure was ever present on the youngest son, who loved the sciences, to be a medical doctor—to humans.

Choosing his own path

Michael came to Florida in the mid-eighties to be with his grandparents and went to school in the States. Although his family’s ambitions for him were very much in his consciousness, he opted for veterinary sciences.

Growing up he had been surrounded by various pets such as dogs, rabbits and birds. He completed a bachelor of science in microbiology and cell science in 1994 from the University of Florida, and four years later he earned a doctorate in veterinary medicine, graduating with high honors. He spent a further four years as intern and resident in small animal surgery at Michigan State University.

The Board of the American College of Veterinary Surgeons certified him in 2003. His particular interest and experience in soft tissue surgery, including minimally invasive, oncological, laser, reconstructive, cardiothoracic and gastrointestinal surgery, served as a valuable asset to the Seattle Veterinary Specialty Hospital. In addition, he has authored numerous articles for scientific books and journals on various topics, published nationally and internationally. Dr. Michael Mison has become one of the most successful vets in the Seattle area.

Michael goes home regularly to visit with family and connect with his roots, but in terms of applying himself and his talents in the country of his birth, he realizes that the Philippines still has overriding priorities that need to be addressed before it can get involved in investing energy and resources on a level of technology for animal care for which he was trained.

He wishes there were better awareness of the possibilities of improving veterinary care in the Philippines, and an increased level of respect for his area of medical science. In our culture, he says, there was always the concern and the misconception that veterinary medicine was a lesser calling than human medicine. “But I have proven the contrary. I save many lives, not only of animals, but I also preserve the wellbeing of the whole family unit.”

Michael has a golden retriever, who initially came to him suffering from an ectopic urethra. The original owner, a champion breeder, wanted him fixed and to find a loving home for him. Without hesitation, Michael told the owner he would treat him and take him as his own. The dog recovered beautifully, and he was named Pike in honor of his dwellings and playpark near the Pike Place Market. Pike has become Michael’s best dog, best friend, trusted hiking companion and partner in an active lifestyle.

Today, Michael is chief surgeon and co-founder of Seattle Veterinary Specialists, which he started with his business partner, skiing buddy and fellow doctor, Dr. Sean Sanders, a veterinary neurologist and neurosurgeon. (He continues to serve as assistant professor in the Department of Comparative Medicine at Washington State University; he was recognized for his excellence in teaching with the Carl Norden-Pfizer Distinguished Teaching Award.)

The idea of a multidiscipline hospital came about while they were sipping coffee at a ski lodge. They talked about building a “special” clinic for pets and scribbled on a napkin the major anchors of a then castle in the sky – a hospital, a dream team of medical specialists, possible names, finance, place, budget – all providing compassionate, comprehensive, state of the art care for animals. 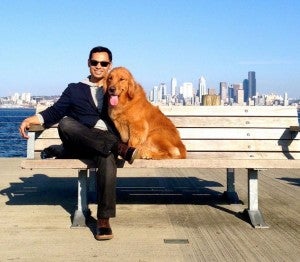 There were about six specialized clinics in the Puget Sound area in Washington State for residents whose lives were made whole by a loving pet. At the time, Michael was working at a small animal hospital at Lynwood, outside Seattle, and teaching. Although times were hard, the Seattle Veterinary Specialists hospital was born; this was seven years ago amid the challenges of a recession, lack of proper financing, and unproven skills at management.

Two other partners joined the business, and today, the hospital has grown 70 percent in patient volume and is a well respected, first-rate veterinary hospital and teaching hospital for interns and residents. Its excellent reputation has become far-reaching, attracting large investments for further expansion.

With his impressive credentials and triumphs, Michael is self-confident, but also humble, grounded by a lingering sense of responsibility that he has room to grow and more to give, especially to the country of his origins. To the extent he can, he will contribute to changing perceptions of animal care, conferring the dignity it deserves. He plans to fund scholarships for Filipinos as part of a strategy to improve animal care in the Philippines.

What’s his advice to his 13 nieces and nephews and all the young people who look up to him? “I would say to them, believe in yourself, and do what you love to do even if others may disagree with you. Nothing can be worse than hating your job even if you were financially successful. I wake up every morning looking forward to my job, which is pursuing my passion and my interests. In spite of the initial concern regarding my calling, my parents and family are very proud of me. And, do not forget, education will take you far.”

Besides his passion for his job, Michael also plays the piano, goes to the theater, sailing, biking and cooking in his leisure time.

Gia R. Mendoza worked as an international civil servant for many years, and is now retired in Washington State. She enjoys writing and painting.

For more stories on the Filipino diaspora, go to PositivelyFilipino.com.