Aquino tells Fil-Ams: You ain’t seen nothing yet 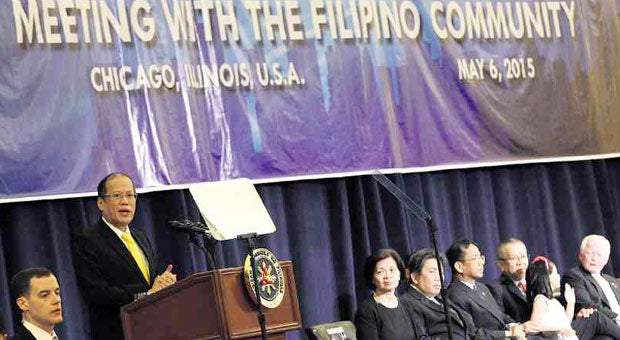 CHASE AFTER THE ‘FILIPINO DREAM’ President Aquino (left) exhorts Filipinos in Chicago, Illinois to chase the “Filipino dream” beyond 2016 during a meeting on Wednesday at JW Marriott Hotel in Chicago, the highlight of his overnight working visit to the United States. The President leaves for Canada on Thursday for a three-day state visit. RYAN LIM/MALACAÑANG PHOTO

CHICAGO—Shaking off jet lag, President Aquino on Wednesday night (Thursday morning in Manila) rallied Filipinos here to chase the “Filipino dream” of a better Philippines beyond 2016.

“The future of the Philippines is in your hands,” he told the Filipino community at JW Marriott Hotel in downtown Chicago, stressing the significance of the 2016 presidential vote in perpetuating the administration’s reforms.

But as leader of the ruling Liberal Party, Aquino neither made any reference nor endorsed any candidate for President.

Ahead of the President’s visit, Chicago-based accountant Edilberto Ortiz posed the question for Aquino: “Is this good government going to continue?”

“There’s a saying: You ain’t seen nothing yet,” Aquino said, raving about the Philippines’ accomplishments.

The President thanked the crowd of 550 Filipino professionals, among other migrant workers, for casting overwhelming “absentee votes” for him in the May 2010 elections.

Then he outlined his administration’s gains in its anticorruption campaign.

Under “good governance,” he reported that the Philippines has gone from being Asia’s “sick man” to the region’s “darling,” and has seen investor confidence rise, “untouchables” go to jail, and unfinished infrastructure projects completed.

While he won’t promise to solve everything when he steps down in June 2016, Aquino said it was clear Filipinos were reaping the fruits of the reforms his administration had sown.

“Surely, even the next administration will reap what we [have sown], that is if the straight path doesn’t turn crooked, and if you pick the right leaders as you [did] in 2010,” he said.

As next year’s elections draw nearer, criticisms of the administration have become louder, Aquino told the crowd packed inside the plush hotel’s grand ballroom, including Cabinet officials who joined him on the trip.

“I get blamed for a heavy downpour, and for heavy traffic on Edsa. I even get blamed for Manny Pacquiao’s recent loss,” he said, drawing chuckles from the Filipinos who had been earlier pumped up by Noel Cabangon’s songs.

But then again, the President said, Filipinos “[could] not be fooled.”

“I’m confident that like in 1986, and in 2010, come 2016, you’ll be there to carry on what we’ve started. Our goal is not to go back to the rotten system, but to continue our country’s transformation,” he said.

And there’s no other way to achieve this but for all Filipinos to band together “whichever part of the world you are in,” he added.

“Let’s continue to chase the Filipino dream: a Philippines that is not only full of zest, enthusiasm and goodness, but of opportunities to better one’s self and country, and contribute to a better world,” he concluded.

The President kicked off his working, whirlwind visit to Chicago by receiving Mayor Rahm Emanuel at JW Marriott on Wednesday afternoon. He’s flying Thursday morning to Canada for a three-day state visit.

Emanuel presented Aquino with a city council resolution welcoming him to the Windy City, citing his phenomenal ascension to the presidency and achievements as a leader, before they sat down for a chat.

It was Emanuel’s first day at work after he was reelected for a second term in April. Emanuel is a former White House chief of staff to fellow Chicagoan President Barack Obama. He was elected mayor of Chicago in 2011.

“He said, ‘I am your admirer for being outspoken and clear-eyed on important issues affecting your country,”’ Communications Secretary Herminio Coloma Jr. said, quoting Emanuel.

After the meeting, Aquino motored to the nearby TransUnion headquarters for a roundtable discussion with executives of the US Chamber of Commerce, US Asean Business Council and the National Center for Asia-Pacific Economic Cooperation (Apec).

Aquino ditched a prepared speech and forthwith asked them about their experiences in doing business in the Philippines, and how else this could be improved, Coloma said.

David Neenan, president of International TransUnion, expressed appreciation for the government’s thrust of promoting inclusive growth. TransUnion, he said, has been working with Land Bank of the Philippines in helping small- and medium-scale entrepreneurs gain access to financing.

The other executives expressed interest in doing or expanding business in the Philippines, and Aquino discussed areas that needed their expertise.

“President Aquino replied that being an archipelagic country, the Philippines needs to improve connectivity by expanding the existing nautical highway, improving roll-on, roll-off and port facilities. Possiblities for improving the country’s railway system were also mentioned,” he said.

“President Aquino cited his recent experience in seeing high-quality marble products in Romblon that need to be transported to international markets,” Coloma said.

“Mr. Carter said his company was willing to assist in transporting and promoting such products. He also discussed possibilities for improving trade facilitation. [Finance] Secretary [Cesar] Purisima said the proposed customs modernization law is now being discussed in Congress to address this concern,” he said.

Julie Hoeniges of Caterpillar spoke about expanding her company’s business in mining, while Michael Fernandez of Cargill raised the possibility of raising his company’s investments in the agribusiness field, Coloma said.

“Monica Whaley, president of the National Center for Apec, lauded the Philippine government’s path-finding initiatives in promoting financial inclusion across all spheres of socioeconomic activity,” he said.

As the end of the discussion, Marc Mealy, vice president for policy, US-Asean Business Council, gifted Aquino with a red Chicago Bulls jersey and a green Boston Celtics jersey. Having lived in Boston with his family during martial law, Aquino is a Celtics fan.

Members of the Chicago-based militant group Anakbayan staged a rally in front of JW Marriott, calling for the President’s resignation over a number of issues.

The crowd sang along, clapped and waved miniature Philippine flags with Cabangon egging them on.

When he faced the gathering of Filipinos, Aquino cracked jokes, and afterward stayed longer to pose for group pictures with them on stage, smiling and pressing flesh.

“I got excited when this visit was confirmed. I thought, this is my chance at tasting your deep-dish pizza,” he said to chuckles.

The Philippines has grown by leaps and bounds, the President said, since the administration adopted good governance as its rallying cry. Sadly, this good news has never “trended” on social media, hence, it must not only be “liked” but “shared” on Facebook, he added.

So far, the government has filed 637 cases under the Revenue Integrity Protection Service, Run After Smugglers and Run After Tax Evaders programs, Aquino said.

“I’m sure you’ve heard the news that our politicians who are untouchable are now in jail, if not under hospital arrest,” he said, referring to Senators Juan Ponce Enrile, Jinggoy Estrada and Bong Revilla, who are being tried on plunder charges over the P10-billion pork barrel scam.

Even corruption-ridden agencies, such as the Department of Public Works and Highways, have turned a new leaf, he added.

“Our basic principle: Good governance equals good economics, equals good-quality inclusive growth. That’s why we should forget our tag as Sick Man of Asia; we’re now called the Darling of Asia,” he said.

“The country has achieved investment grade status and risen in the World Economic Forum’s Global Competitiveness Report and in the World Bank’s Ease of Doing Business Report, and according to Bloomberg, is poised to become the second fastest-growing economy,” he added.

“We’re targeting 7 to 8 percent GDP growth this year,” he said.