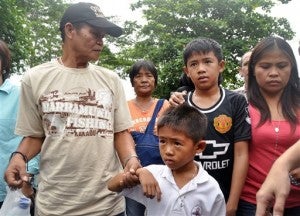 MANILA, Philippines—Celia Veloso and husband Cesar remain adamant in refusing to say sorry to President Benigno Aquino III for not acknowledging the government’s effort in postponing the execution of their daughter Mary Jane.

“Ganun na rin po,” Cesar said when asked by news anchor Anthony Taberna if he shares the same sentiment with his wife.

Celia said they will completely forgive Aquino if Mary Jane is already free and back in the Philippines.

However, the couple were one in saying thank you to the Aquino administration for its effort in saving Mary Jane’s life at the 11th hour.

“Kung may nagawa po talaga sya ay maraming salamat (If he really did something [in saving our daughter] then we say thank you,” Cesar said.

Asked further by Taberna why the refusal to give an apology, Cesar said the government only made its move “in the last two minutes.”

Celia said her decision not to say sorry to the President wasn’t influenced by Migrante International and other organizations that she said have given them more assistance than the Aquino administration.

“Wala pong nagtuturo sa amin. May sarili po kaming pag-iisip. (No one is teaching us [to say what we want to say]. We have our own minds),” said Celia.

In a phone-patched interview, Communications Secretary Herminio “Sonny” Coloma said the President isn’t angry at all to the Veloso couple.

Coloma explained the President understood what the Veloso couple has gone through.

(The government has the utmost understanding of their situation. [We’re doing] what we can do to ease their suffering. Mary Jane’s life is very valuable and we’re here to do our duty.)

In a later radio interview, Celia told broadcaster Noli de Castro that as early as two years ago, she asked for help from the Department of Foreign Affairs and from Vice President Jejomar Binay, who also serves as the Presidential Adviser on Overseas Filipino Workers’ Concerns.

“Puro pangako po, parating sinasabi gagawin namin lahat pero walang nangyari. (All promises. They kept on telling us they will do everything they can but nothing happened),” she said.

Celia cited a lawyer from the DFA who told her Mary Jane’s case is hopeless.

Mary Jane was found to have carried 2.6 kilograms of heroin in her suitcase at Yogyakarta airport in 2010. She claims the heroin was sewn into her suitcase lining without her knowledge.

Celia added back then, they were prohibited by the lawyer not to talk to the media.

Asked by De Castro what are their demands now, Celia said aside from Mary Jane’s freedom, she wants the government to provide adequate employment opportunities in the Philippines so that there will be no more Filipinos leaving the country to seek a better life abroad.

Indonesia: Reprieve due to Aquino plea; credit-grabbing in full swing