MARY Jane Veloso should stay in Indonesia and participate in the legal proceedings in the Philippines against her recruiter through video conference.

This was relayed by the attorney general in Indonesia to Veloso’s Indonesian lawyers, who then informed her Filipino lawyers with the National Union of People’s Lawyers (NUPL).

Lawyers from Rudyantho and Partners, the Indonesian law firm that has been representing Veloso in the drug trafficking case, held a teleconference with the NUPL on Monday, together with Indonesian and Philippine migrant groups, to discuss legal options with respect to the suspension of her execution by firing squad. 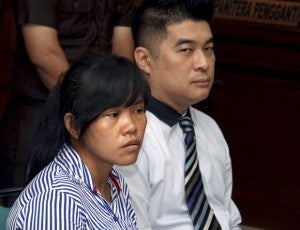 “Of course, our position is that Mary Jane should go home,” Edre Olalia, NUPL secretary general, said on Tuesday. “Ultimately, it will be a government-to-government arrangement and we will defer to that arrangement.”

Veloso, who was sentenced to death for drug trafficking charges in Indonesia, was granted a reprieve by Indonesian President Joko Widodo to give way to the human trafficking, illegal recruitment and estafa cases against her alleged recruiters, Maria Kristina Sergio and Julius Lacanilao.

The Department of Justice earlier said it would request access to Veloso under the Asean Mutual Legal Assistance Treaty through three options during the trial stage: by deposition, by video testimony or by personal appearance.

READ: DOJ will request Indonesia for access to Veloso

The NUPL serves as Veloso’s Philippine private counsel. Olalia said he sent another letter to the DOJ, the Department of Foreign Affairs and law enforcement authorities reiterating their representation and cooperation in the case against Sergio and her cohorts.

Pending the terms of the reprieve, the Indonesian lawyers have written the attorney general asking that Veloso’s execution be suspended until the completion of all legal proceedings in both the Philippines and Indonesia, Olalia said.

“As of yesterday (Monday), there is no written order yet. The decisive position on the parameters of the reprieve will depend on Indonesian authorities, so we’ll wait for the written order or the attorney general’s reply to the letter,” Olalia said on Tuesday. SFM/AC