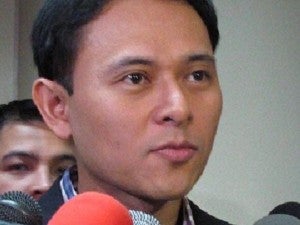 As workers’ groups marked Labor Day with protests on Friday, two lawmakers said the government should reconsider the labor export policy that has driven citizens like Mary Jane Veloso to desperate measures to seek employment abroad.

“Instead of creating jobs in the country, the government vastly relies on its extant labor export policy, which drives millions of Filipinos abroad to find jobs,” said Kabataan party-list Rep. Terry Ridon.

“In a way, we are a nation of Mary Janes. Her story is a story common to our generation. And unless fundamental changes are implemented, more Filipinos will be victimized, more youths will be driven to desperation,” Ridon said in a statement.

Sen. Sonny Angara urged the government to focus on providing higher-paying jobs within the country to keep Filipinos from working overseas.

“Yes, we can talk about their remittances that spur our economy but do we really want to become the world’s employment agency?” Angara, the acting chair of the Senate committee on labor, employment and human resources development, said in a statement.

According to Angara, the country’s labor force grows an additional almost one million each year.

“This number cannot be absorbed by available jobs here in the country, forcing Filipinos to seek better-paying jobs abroad to support their families even with the risk of facing abuse and exploitation,” said Angara, who recently filed a resolution calling for a review of labor laws and regulations.

With the steady rise in violations of Filipino migrant rights, the cost of working overseas is higher than we think, he said.

“If we ask most of our countrymen, I think they would definitely still prefer to stay home but with higher-paying jobs,” Angara said.

Ridon said the government’s reliance on remittances from the overseas Filipino workforce was impeding job creation and leading to more cases of victimization by human traffickers, as in the case of Veloso, who remains in death row in Indonesia after she was convicted of smuggling drugs.

“This is the very situation that drove thousands like Mary Jane Veloso to desperation, forcing them to rely on human traffickers just to escape the cycle of poverty,” he said.

According to the Department of Foreign Affairs’ records, victims of human trafficking totaled 1,135 in 2013, while the number of overseas Filipino workers (OFWs) facing death penalty cases, most of which are drug-related, has reached 88 as of March this year.

While Angara gives credit to the Aquino administration for developing reintegration programs that allow returning OFWs to use their earnings for enterprise development, he said providing higher-paying jobs in the country is what would really make “migration be a matter of choice and not a necessity.”

“We are pushing for the expansion of the Public Employment Services Office (Peso) to serve as job placement agencies in provinces and municipalities to help people find work amid reports that it takes up to two years for new graduates to get work,” the senator said.

Angara is also pushing for the passage of the Apprenticeship Training Act to provide young Filipinos with skills and access to employment, noting that a majority of apprentices are hired by the companies where they have their apprenticeship.

Ridon cited the lack of national industries and the worsening state of agriculture as some of the primary obstacles to job generation.

“This policy is further intensified by the implementation of the K to 12 program, which is fundamentally designed to produce skilled workers for export,” he said.

Figures from the Philippine Statistical Authority’s (PSA) Labor Force Survey released on March 12 show that about 4.1 million Filipinos are unemployed as of January.

All in all, about 3.3 million youths aged 15 to 34 are unemployed as of January. The PSA also notes that one in five unemployed Filipinos is a college graduate.

“We have to consider that these are conservative government figures that do not consider those who work part-time or work from home as unemployed. Still, the figures as they are reveal the worsening jobs crisis in the country, especially in the ranks of the youth,” Ridon said.

“Coupled with depressed wages and the soaring cost of living, this worsening jobs crisis results in widening poverty in the country,” he said.

He said the government should create a more progressive and equitable tax system, “one that promotes upward mobility and a just society.”

With the current taxation system, which has remained unchanged since 1997, an upper middle-income earner who makes around P60,000 a month is already at the top tax bracket and is paying the same tax rate as the country’s millionaires and billionaires.

“If we adjust the brackets, the tax rates of the working middle class will decrease and will result to a higher take-home pay that will hopefully bring our OFWs back home. This could incentivize our labor force to work and invest in our country, and more importantly, to be with their families,” the senator said.

Read Next
Give Maria Kristina Sergio to Indonesia
EDITORS' PICK
Egg prices rise due to bird flu, increased holiday demand | #INQToday
18,529 out of 24,903 pass nursing board exam
The Best Tech Gifts For The 2022 Holidays
Marcos urges Filipinos to be like Bonifacio: honest, patriotic
The vivo Y16 makes the season of giving more thoughtful for the whole family
House energy committee chair Arroyo bats for cheap electricity
MOST READ
Mel Tiangco on co-anchor Mike Enriquez’s condition, ‘rivalry’ with Korina Sanchez
LOOK: Vina Morales goes to Boracay with mystery man
Marcos urges Filipinos to be like Bonifacio: honest, patriotic
Ref admits to cheating: How Manny Pacquiao snagged the win
Don't miss out on the latest news and information.