Journalist killings must come down, says US ambassador 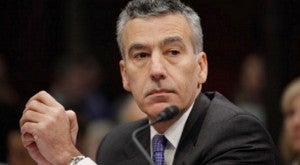 MANILA, Philippines–US Ambassador Philip Goldberg on Thursday described the situation of violence and killings against journalists in the country as “a glass half full,” saying the government must continue to work to bring the number of incidents down to zero.

While press freedom in the Philippines has had a “positive development” over the past few years, the declining incidence of media killings did not reflect the reality, Goldberg told a forum on Wednesday hosted by the Philippine Center for Investigative Journalism to mark World Press Freedom Day.

“We’ve seen some positive development with regards to press freedom in the Philippines over the last few years but it’s not there yet,” he said.

Goldberg cited data from human rights organizations showing that cases of extrajudicial killings, including those of journalists, had dropped from a high of more than 200 per year in the late 2000s to from 50 to 100 per year in recent years.

“I feel almost embarrassed saying that that’s a positive development because it’s not in reality… there is still a tragic number of deaths,” Goldberg said.

“But statistics show both a significant decline in extrajudicial killings as well as the seriousness of the problem in the Philippines. It’s a glass half full,” he said.

The International Committee to Protect Journalists has ranked the Philippines as the third-most dangerous country for journalists next to Iraq and Syria, with at least 77 deaths.

In 2013, the World Press Freedom Index placed the Philippines in 147th place among 180 countries, and 149th in the succeeding year.

The Philippines, with the help of other governments, institutions and civil society groups, must work “so that the number becomes zero” and legal action against perpetrators will be facilitated in a speedy manner, Goldberg said.

Citing the slow pace of the trial of the suspects in the Maguindanao massacre, which claimed the lives of 58 people, 32 of them journalists, the US ambassador urged the government to do more to address media violence and killings, like training the police in effective investigation techniques and training prosecutors to work with law-enforcement agencies.

But he also noted that the government had taken some important steps, like deepening coordination between prosecutors and the police in pushing for extrajudicial-related cases.

“As a result of this collaboration, prosecutors can take a more proactive approach early in the investigative stage to ensure higher conviction rates of cases involving grave violations of human rights,” said Goldberg.

Terence Jones, the UN resident coordinator and United Nations Development Program resident representative, said that despite the restoration of democracy through the People Power revolution 29 years ago, the culture of impunity continued in the Philippines.

“The Philippines has ranked as one of the most dangerous countries in the world for media personnel… We should reflect upon why [this] trend is happening,” Jones told the forum.

“These extrajudicial killings don’t only pose a threat to a journalist’s right to life. They also represent threats to freedom of speech, right to information and, ultimately, the right of a nation to call itself a democracy,” he said.