Retired Fil-Canadian teacher sets up school for kids in Malawi 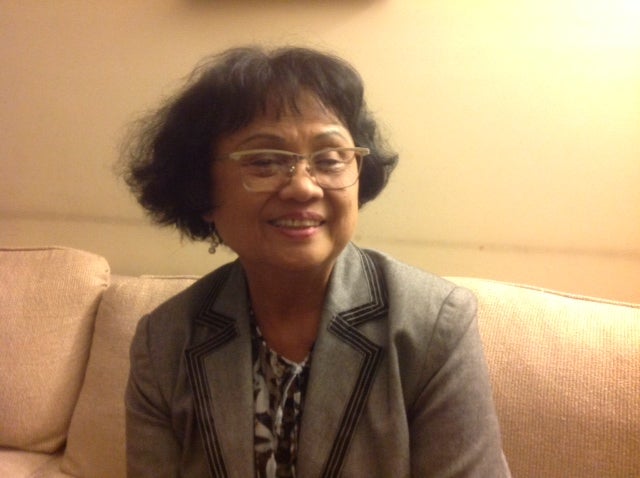 a school in Malawi.

with her “kiddies”– the pupils of a kindergarten

she started in early 2013 at the request

Apilado, who retired from teaching in 2011, had been looking forward to a quiet and restful period filled with reading her favorite authors and devoting her time to her painting.  All that changed when she went to visit friends in Malawi that same year.

INQ:  How, when and why did you go to Malawi?

RA:  I went to Malawi in 2011 as a tourist, to visit my close friends, Lloyd and Melinda McDougall, who are missionaries.  We went to Lake Malawi Resort and several places.  The highlight was climbing Mt. Mulanje.

How did you end up working with the kids?

from the climb, I met several church people.  One was an Anglican bishop in charge of a Bible college

in Liwonde.  Another was the bishop of the Evangelical Baptist Church of Malawi.

So it was an ecumenical group?

Yes, in Africa, especially there in Malawi, when you are Christian, all the Christians are united.  They don’t think of you as Catholic, Protestant, Anglican, or Seventh Day Adventist.  They are all united.  It’s just being unified as Christians; as you know, Malawi is predominantly Moslem.

How did you get involved?

I was introduced as a just-retired teacher

.  So the Bishop said, “If you are retired, you are able to come back here and help us put up a primary school in the village. In this small village here, the children from kindergarten to grade 3 are too little to go to Maplot, to the primary school.”

What made you decide to help?

I had to go back

to Canada first to ask my family.  But it seems I was really destined to go back and help.  I went back the following year, in 2012.  I had recovered from cancer, and I was contemplating maybe the Lord had some special assignment for me, that’s why I went through healing and went back to where I seemed to be working my strength.

I started the school in the village. Bishop Phiri distributed some flyers, that they were starting a kindergarten.

Only five kids started that September!  We held our classes under the shade of a big eucalyptus tree.  So I said to the Bishop, how can we start a school with only five students?  And the Bishop and the ladies there told me not to worry, the children will come.  By the end of ten months, 25 children graduated from kindergarten.

In December, I put up a Christmas concert.  It was very nice and really represented the unity of Christians and the embracing of Moslem children.  I planned the Christmas concert just for the Evangelical Baptist students that I had.

, who became my friend, said “Rose, I heard you are going to have a Christmas concert.  Are we not invited to join?”

And I said “But of course!”   So they joined and sang songs

in their local language.  The big kids in grades 7 and 8 did a play and one girl read the Christmas story from Luke.

My friend, who used to be my neighbor, operates a school in Malawi, so I used to help her out too.  And I taught her children how to play

the recorder.  I brought with me ten recorders and a guitar.  I accompanied them on the guitar while they played eight songs I taught them, starting with “Mary Had a Little Lamb” and ending with “Ode to Joy.”  She ran a nonsectarian private school and she asked me why I have not invited them to participate in the concert.  And so I said, “But of course!”  Most of her students are Moslem.

It was very nice, at the end of the ceremony was the lighting of the Christmas candle.  Everybody sang, “This little light of mine, I’m gonna make it shine.”  The Bishop was the one who gave the Christmas keynote; the welcome remarks were done by the pastor of the Evangelical Church and the principal of the Catholic school did the closing prayer.

And there were other people, highly respected members of the community — one was the principal of the secondary school.  He said “I can’t believe what you’ve done, Rose.  First time I ever saw Moslem women coming inside our church.”  The mothers were sitting in the pews, and the fathers were outside listening

to the children singing inside.

Where was the physical structure where you held classes?

The foyer of the admin building of the church!  Finally when I had so many kids, I changed the conference room into a classroom, decorated with all my classroom materials and charts from Canada.  I brought mats for the children to sit on the floor and I borrowed the benches from the porch outside.   When they are practicing

writing, the kids kneel on the mats and use the benches as tables.

How did you get the land for the proposed school building?

I had to go back

the school officially, in 2013.  In order to operate a school, you have to register

the school as a private school, but not in my name.  I was the applicant but the owner is the Evangelical Baptist Church of Malawi.  After I got the registration, we started Grade 1.  We have 25 Grade 1 and 31 kindergarten pupils.   This coming September we will have Grade 2.  Our problem is where to put them.  I “borrowed” every nook in that admin building!

So now I have a kindergarten teacher, who is not certified, but has experience as a daycare teacher.  I handled grade 1, but I had to go back to Canada, so I hired a girl who is certified at the teachers college

in Malawi.  I will need to borrow more space.

In December 2014, the Bishop negotiated with the town council and the village chief to grant a piece of land where to build a school.  They initially allowed us 1 hectare.  But we need more, we need grounds for a playground, we may need to put up a secondary school.  So we got 2.8 hectares.  We were asked to pay 1 million kwacha per hectare;  1 Canadian dollar equals 386 to 404 kwacha, depending on the exchange rate.  I needed 2.8 million kwacha, around 6000 Canadian.

How do you plan to raise the money for the land?

I met Terry Orchard, a pastor in Ottawa, in 2012.  He was in Malawi and his wife is Filipina. He was a founder of the Evangelical Baptist Church of Malawi.  He was one of those who unified the churches to become evangelical.  So during the 40th anniversary in 2012, he was invited to be a speaker.

My participation is voluntary. I paid my own way — my fare, food, lodging, my share for the night guard.   He met me the first time carrying a little girl and followed by a flock of kids, and called me a Pied Piper.

When he went back to Ottawa, he told his congregation about me.  He phoned my husband Arthur before I returned to Canada.  He invited me to speak to his congregation, and they have offered to assist with payment

Thank God there are so many kindhearted people in Ottawa who are helping me defray my expenses.

How about the building?

are planned for the building.  Two architects in London who had also built schools in Malawi will meet with me to share their plans and help me in getting the permits.

What is your objective for this trip?

I will bring the receipts and the coordinates for the land.   The school is to be called Liwonde New Hope Community School.  Although it is owned by a Christian group, the school is open

to the whole community.  The school is not to be limited to the Christian children but is for all children.  The opportunity

for a good education is open to all.  Who knows, one day one of our students may grow up to be a person of influence, maybe even president of Malawi?  We should not limit our students.

Do you have a message for our readers?

My message is that all my life I have been a teacher, I want to make sure that every child, rich or poor, Moslem or Christian, should be given the opportunity to have a good education.  I love all children–no matter their color or religion.  They are all the same — we have to embrace all children and give them the opportunity.  It is only through education that a country can progress.

Read Next
NaFFAA calls on Fil-Am community to help Nepal earthquake relief
EDITORS' PICK
Smart releases Hyun Bin’s second TVC
Water remains our saving grace right now
Duterte signs terror law amid wide opposition
EuroMillions Superdraw: A lottery draw unlike any other is coming to the Philippines
‘Keep our silence:’ Duterte tells troops not to avenge slain agents
Stress and PH millennials amid pandemic: What surveys found
MOST READ
Man who stole 2 cans of luncheon meat lands in jail in Manila
Duterte tells military: No other president looked at you the way I did
Duterte signs terror law amid wide opposition
Baguio mayor, five-man team flying to infected Cebu to train contact tracers
Don't miss out on the latest news and information.