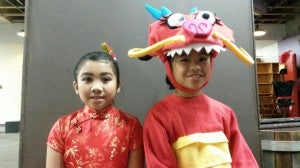 Madeline Montoya, left, and Jenika Fernando,right, in costume as they prepare for the dress rehearsal a week before their opening night. CONTRIBUTED PHOTOS

MILPITAS, California – Talented Filipino American girls will hit the spotlight in the Children’s Music Theater (CMT) production of production of the Disney classic “Mulan” from April 30 until May 3 at the historic Montgomery Theater in Downtown San Jose.

The show’s Filipino American talents, Jenika Fernando, Madeline Montoya and Anela Quiroz, are no strangers to the stage.  Although young, these girls have worked hard to prove that they can handle the pressures and time commitments to school, homework, family and their performance schedules.

Jenika Fernando, 8, plays the role of Mushu, a comical and witty character.  Performing since age four, she has participated

in several talent showcases, musicals and plays.  Through her time performing, she has learned to balance

rehearsals and school work, both of which she values.

“My favorite thing about performing is meeting new friends

at each show,” she said.  “I’ve met a lot of people while rehearsing for ‘Mulan’ and I think it’s going to be a great performance. This show is very surprising and the audience will like all the actions.” 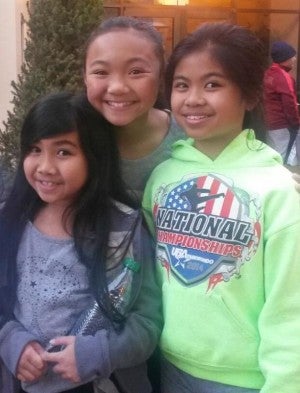 From left to right Madeline Montoya, Anela Quiroz and Jenika Fernando during rehearsals. All three performers have known each other before joining the production of “Mulan” as they are talents of PnC Music Company.

Madeline Montoya, 8, will be acting as one of the villagers.  Performing since she was six, she fell in love with singing “sassy songs” and dancing hip-hop.  She enjoys the rehearsals because even though they are hectic, she has fun while dancing with her friends

.  Montoya wants to pursue a career in performing and idolizes Taylor Swift.

“I really like everything about performing.  I get stage fright before going on stage, but I handle it because when I’m done I know I’ve got it off my chest,” Montoya said.

Anela Quiroz, 11, has played piano and sung and danced her whole life.  She is in a band with four other people from her school as well as one under PnC Music Company.  In ‘Mulan,’ she is playing Grandmother Fa, a humorous elderly character.  Besides keeping up with schoolwork, there are some other challenges that comes along with this role.

Anela said, “The hardest part of this role is acting like an old person and making my voice sound elderly.”

These girls plus a whole cast of young, developing talents will be featured at CMT’s performance just around the corner.  For more information