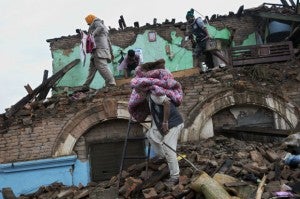 Residents rescue items from debris of a house that was damaged in Saturday’s earthquake in Kathmandu, Nepal, Monday, April 27, 2015. AP FILE PHOTO

A five-man medical team from the Philippines is set to leave the country Thursday noon to help out in the relief efforts in quake-hit Nepal.

The team, composed of Florianne Adlawan, Jasper Caleb Aguilo, Dan Espenzer Velasco, Dr. Ranvier Martinez and Dr. Cleofe Babao-Medina, will leave Manila around 12:30 p.m. via Kuala Lumpur and is expected to arrive at Kathmandu at around 10:30 p.m. Thursday.

In a teleconference Tuesday night, Philippine Red Cross (PRC) Chair Richard Gordon said that the team will provide medical assistance to those affected by the magnitude 7.8 earthquake that hit the Himalayan nation midday Saturday.

While the team of three PRC nurses and two Makati Medical Center doctors who will be deployed for a month will focus mostly on maternal and child health care, Gordon said that they are also capable of other medical services, such as surgical procedures.

The medical team will be stationed at the Red Cross’ emergency field hospital, which will support the devastated country’s hospitals that are “overwhelmed with trauma cases.”

All of them have previous experiences in disaster response in the country and have different roles to play in the Nepal relief effort. Medina is an ob-gyne while Martinez specializes in emergency cases.

Adlawan will serve as the field hospital’s administrator, while Aguilo and Velasco are its nurses.

The field hospital, provided by the Canadian Red Cross, has a minimum bed capacity of 30 and can be expanded depending on the needs in the area, according to Canadian Red Cross country representative Paul Drossu.

The same field hospital, which was flown in from Ottawa, Canada, and is now in Kathmandu, was used in the aftermath of Supertyphoon “Yolanda” (international name: Haiyan) in Ormoc, Leyte province, in November 2013.

Latest government figures showed that the death toll from the massive quake has already claimed the lives of more than 5,000 and injured another 10,000.

Apart from the five-man medical team, Gordon said that a 10-man water and sanitation team is also set to leave within the week. The team, composed of volunteers from Zamboanga, Iligan, Camarines Sur, Pangasinan, Laguna, Valenzuela and two experts from the national headquarters, will help out in the monitoring, treatment and distribution of water in Nepal, which has been in short supply four days since the tragedy.

A third team, composed of the 10-member emergency response unit, is also on standby to leave this week.

Team leader Leonardo Ibajo said that they are set to leave for Nepal Wednesday at 3 p.m. but are still awaiting clearance from the Nepalese government so they could enter and help in the relief efforts.

He said that they would be bringing in light equipment considering the country’s terrain, as well as its narrow streets.

“Accessibility is difficult. What we’ll bring [to Nepal] are manually powered hydraulic equipment that are not reliant on fuel,” Ibajo said, adding that they would also bring in solar-powered equipment given the conditions in the area.

Gordon, who is currently in Geneva, Switzerland with PRC Secretary General Gwendoline Pang for the 31st Governing Board Meeting, said that the International Federation of the Red Cross “congratulated” the PRC in its efforts.

The former senator also said that those who wish to extend their help to those affected by the quake may do so by donating to the PRC.

Donations can also be coursed online through  http://ushare.redcross.org.ph