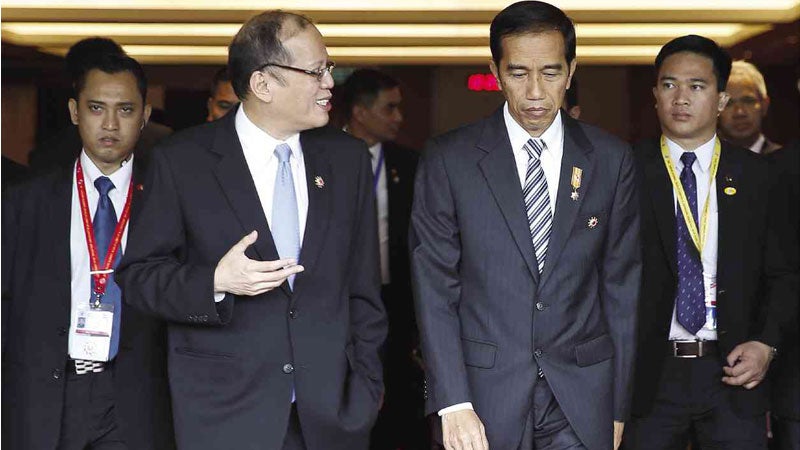 VELOSO ON THEIR MIND President Aquino asks Indonesia’s President Joko Widodo to spare the life of Filipino Mary Jane Veloso after the plenary session of the 26th Asean summit in Kuala Lumpur. AP

Led by the hand through a scrum of reporters to the Indonesian island prison of Nusakambangan, the 6-year-old boy looked confused and frightened as he made one of his final visits to his mother before her execution.

During the visit, Filipino maid Mary Jane Veloso gently explained to 6-year-old Mark Darren and her second son, 12-year-old Mark Daniel, that she would not be coming home.

“She tried to explain again,” Agence France-Presse quoted Veloso’s elder sister Marites Veloso-Laurente as saying during an interview in Cilacap, the port town that is the gateway to the island. “If Mama does not come home, just think Mama is in heaven.”

She could go as early as Tuesday, with an Indonesian district court rejecting on Monday a second appeal of her death sentence for drug trafficking.

Charles Jose, spokesman for the Department of Foreign Affairs (DFA), said the Sleman District Court denied Veloso’s second appeal in accordance with the Indonesian Supreme Court’s rule that “only one appeal is allowed.”

Veloso’s Indonesian lawyer, Agus Salim, also confirmed that the appeal had been rejected.

Salim said the appeal presented a new finding obtained from an investigation by the Philippine Drug Enforcement Agency (PDEA).

“Results of the investigation reveal that Mary Jane is not a courier in the international drug trade. This finding has been confirmed by the National Narcotics Agency,” Salim said.

“It seems that the judicial panel did not want to include the [new finding] in their considerations,” he said.

But the DFA, Jose said, remained hopeful that Veloso’s execution could still be stayed, with President Aquino appealing to Indonesian President Joko Widodo in Kuala Lumpur, Malaysia, to spare her life.

Aquino and Widodo met for five minutes Monday morning on the sidelines of the 26th Association of Southeast Asian Nations (Asean) summit and discussed Veloso’s case.