Veloso’s execution to go ahead – Indonesia 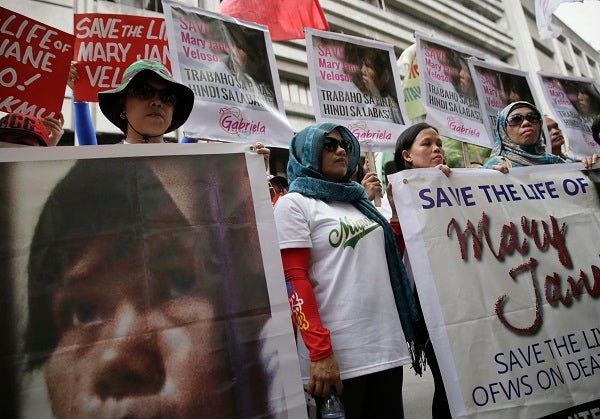 Protesters display placards during a rally at the Indonesian Embassy in the financial district of Makati city, east of Manila, Philippines, to appeal to the Indonesian government to spare the life of convicted Filipino drug trafficker Mary Jane Veloso Friday, April 24, 2015. AP

THE Attorney General’s Office in Indonesia said on Monday that the executions of nine drug convicts including Mary Jane Veloso will continue despite protests from the governments of the convicts’ countries of origin, the Jakarta Post reported Monday night.

The paper said Antara news agency quoted Attorney General M Prasetyo as saying “all countries whose citizens will be executed will certainly approach the government, but they cannot influence our sovereignty.”

According to the report, Prasetyo said that he had not been lobbied personally, stressing that he was subject to tight rules and cannot be contacted by third parties.

“I’m not allowed to get in touch with certain parties,” Prasetyo claimed.

French death row convict Serge Areski Atlaoui has been exempted from execution scheduled for Tuesday, as he is resubmitting his second case review to the State Administrative Court, Jakarta Post said.

Attorney General’s Office spokesperson Tony Tribagus Spontana confirmed the delay in Atlaoui’s execution. “The delay is not because of pressure from the French president as has been rumored,” he said on Monday. EBF in Jakarta/AC in Manila