How Indonesia carries out executions 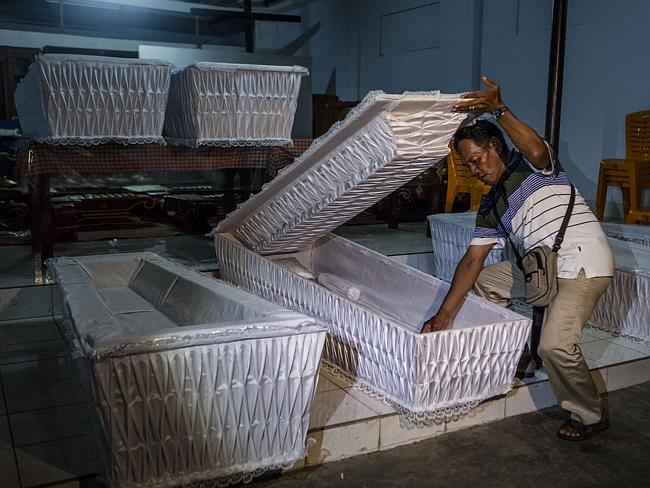 Under Law No. 2/1964 on execution procedures, a prosecutor is tasked with leading an execution. The Attorney General’s Office (AGO) has allocated around Rp 200 million (US$15,500) for the cost of executing each person.

1. Death-row convicts are to be moved to a prison or an isolation cell of a prosecutor’s choosing where he or she will be informed of their execution three days beforehand. At this time, the prosecutor should accept any messages or thoughts the convict would like to convey.

2. The execution must not be made public and should be done as simple as possible unless the president orders otherwise. The convict’s lawyer can attend the execution on request.

3. The provincial police will form a firing squad made up of 12 enlisted officers (Tamtama) and one non-commissioned officer (Bintara) who will be led by a high-ranking officer. The prosecutor will have full authority over the firing squad until the execution is complete.

4. The convict, dressed simply, will be escorted by the police to the designated location of the execution. The convict may also request religious counsel to accompany him or her.

5. Once at the destination, an officer will blindfold the convict unless he or she requests otherwise. The convict may choose to stand, sit or kneel. The convict may also have their hands and feet tied if the prosecutor deems it necessary.

6. Once the convict is deemed ready, the firing squad will be called upon with their firearms where they will position themselves no less than 5 meters and no more than 10 meters from the convict.

7. The prosecutor will then order the execution to start, to which the firing squad’s commander will lift up his sword to signal the squad to focus their firearms on the convict’s heart and then put down the sword to order the shooting to start.

8. If the convict still shows signs of life, the police commander will order the non-commissioned officer to take the final shot at the convict’s head, near the ear. A doctor will then confirm whether the convict has died.

9. The convict’s family or close friends are responsible for the convict’s burial unless the prosecutor says otherwise. If the convict cannot be buried by their family or friends then the government will organize a burial based on the convict’s religious beliefs.

10. The prosecutor must write up and sign a report on the execution that will be inserted in the official court ruling letter.

Fourteen personnel from the police’s Mobile Brigade (Brimob) are assigned to an execution, but only 12 are tasked with shooting while the two others are placed on standby.

The reason for the use of only one live bullet is to avoid the inmate’s chest being heavily damaged and causing more pain, according to the police.

Police officers in their early 20s are usually selected to carry out the task as they are considered to be physically and mentally fitter than their seniors.

The officers selected for the firing squad are given extra training to sharpen their shooting skills.

Read Next
PH envoys hit for acting like ‘tourist guides’ of politicians
EDITORS' PICK
Complete your early Christmas shopping with vivo V25 Series
The vivo Y16 makes the season of giving more thoughtful for the whole family
What’s in a name? ‘Maharlika’ evokes time of mythmaking
House energy committee chair Arroyo bats for cheap electricity
Easterlies to bring rain in PH on Sunday — Pagasa
China’s Xi unwilling to accept vaccines despite threat from protests — US intel
MOST READ
Maxene Magalona sees separation from Rob Mananquil as ‘blessing in disguise’: ‘There’s no more anger’
Are we ready for a sovereign wealth fund?
SC sets 2023 Bar exams on Sept. 17, 20, 24
What’s in a name? ‘Maharlika’ evokes time of mythmaking
Don't miss out on the latest news and information.