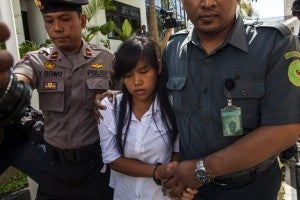 KUALA LUMPUR, Malaysia – President Benigno Aquino III on Monday was able to discuss with Indonesian President Joko Widodo the plight of Mary Jane Veloso, who is set to be executed in Indonesia for drug trafficking.

“President Aquino talked with President Widodo earlier this morning and appealed for humanitarian consideration for Mary Jane Veloso who was apparently duped into being an unwitting carrier of illegal drugs,” Communications Secretary Herminio Coloma Jr. said.

Aquino and Widodo had a “pull-aside” meeting after the opening ceremony of the 26th Association of Southeast Asian Nations (Asean) Summit in Kuala Lumpur.

Before he left Manila, Aquino had promised to discuss the issue with Widodo.

Aquino reportedly said Widodo seemed “sympathetic” and promised to consult with the Indonesian attorney general on some legal issues.

The two leaders are set to meet again later in the day for updates.

Reports said Veloso and several other foreign nationals on death row will be executed on April 28.

Veloso’s relatives have repeatedly asked Aquino for help. They explained that Veloso was a victim of an international drug syndicate.

On Monday afternoon, both Aquino and Widodo are headed to Langkawi, a large island in Malaysia, for the second half of the Asean Summit.