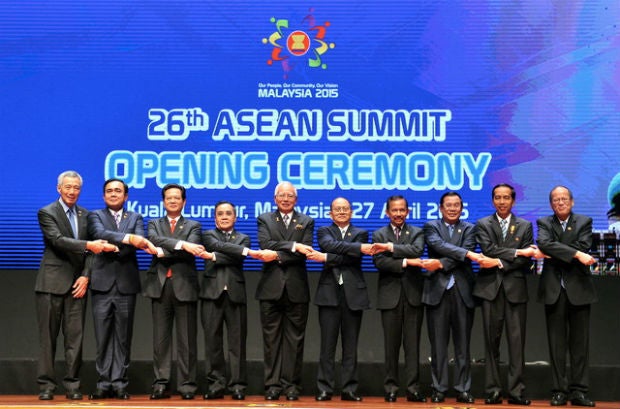 The highlight of the event was the Asean handshake of the leaders and the speech of Malaysian Prime Minister Najib Abdul Razak, the chair for this year’s summit.

During the Asean handshake, Aquino stood beside Indonesian President Joko Widodo. The two are expected to have an informal meeting after the ceremony to discuss the plight of Mary Jane Veloso, a Filipino who is in death row in Indonesia for drug trafficking.

While April 27 marks the official opening of the summit, related meetings have been held in KLCC since April 24. Foreign and trade ministers have been holding meetings on various concerns and in preparation for the summit. On April 26, the leaders of the 10 member states arrived and attended the gala dinner hosted by Najib.

Among the topics to be discussed by the heads of state are the Asean integration, China’s reclamation in South China Sea, and efforts to curb extremism in the region.

After the plenary and a series of meetings with the Asean Inter-Parliamentary Assembly, the Asean Business Advisory Council, youth representatives and civil society organizations, the leaders will leave for Langkawi.

Langkawi, an archipelago of islands in Malaysia, is the venue of the second half of the Asean Summit. It is where the retreat for the leaders will be held. Aquino will also attend the 11th Brunei-Indonesia-Malaysia-Philippines East Asean Growth Area (BIMP-EAGA) Summit there.