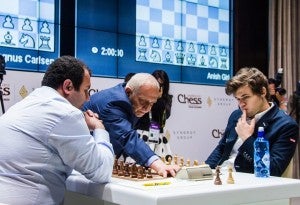 LAS VEGAS – Magnus Carlsen, showing why he is best in the world, outplayed Rauf Mamedov of Azerbaijan to end the tournament with a bang and won the Gashimov Memorial chess tournament pulling away in Shamkir, Azebaijan.

Wesley So settled for a draw with Maxime Vachier-Lagrave of France to finish in an impressive third place, beating Fabiano Caruana of Italy, the world’s No. 3, on tie-breaks.

In the only 9th and final round game that ended decisively, the 24-year-old Carlsen, playing the white pieces, was merciless in pressuring the Azerbaijan grandmaster.

The game was virtually even, however, reaching a queen, rook and pawns end game.

But on the 34th move, Mamedov blundered, giving Carlsen the threat of mate in three, or the loss of major pieces.

Mamedov, one of two local grandmasters entered in the tournament, and celebrating his birthday Sunday, resigned on the 35th move. 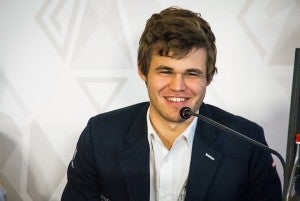 With a half-point lead over Vishy Anand of India, Carlsen did not have to go all-out for a win, and his job was made easier when Caruana forced the former world champion to a draw.

Carlsen finished with seven points on five wins and four draws in winning his second Gashimov Memorial tournament, and second major title this year after capturing the Tata Steel super-tournament in Wijk ann Zee, the Netherlands in January.

Anand, the only other unbeaten player in the tournament, placed second with six points on three wins and six draws; he won 20,000 euros.

It was not a bad payday either for So, who earned 15,000 euros for finishing third with five points, next only to Carlsen, the reigning world champion, and five-time world champion Anand.

Caruana, who slipped one rung lower in the world’s live ranking from No. 2, made 10,000 euros for fourth place, also with five points.

Behind them were former world champion Vladimir Kramnik, who ended up fifth with four points and Anish Giri, So’s erstwhile nemesis, who finished eighth with 3.5 points.

So loses again; carlsen pulls away in Gashimov Memorial chess