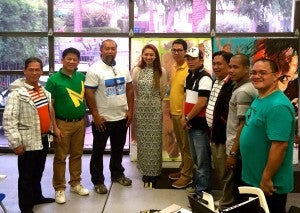 NEW YORK CITY — Millions of fans around the world will be glued to their TV sets on May 2 to watch boxing superhero Manny Pacquiao and undefeated champion Floyd Mayweather Jr. face off in Las Vegas, Nevada. Before the fight officially begins, a 19-year-old Filipino American singer from the Bronx will perform the Philippine national anthem together with The Word Chorale, a group of singing pastors from General Santos City in the Philippines.

“It feels unreal,” an ecstatic Gail Banawis told INQUIRER.net in an exclusive interview April 25. “I am both pressured and excited at the same time. But it’s so comforting to know that I’m sharing the big moment with The Word Chorale, they’re a great group of God-fearing men.”

“It’s a great blessing to be a part of this historical event,” Banawis said. “The idea of having me as one of the anthem singers, especially for this fight, feels like a dream. I still can’t believe it. As fans, we’ve all been waiting for this fight to happen for years.”

Banawis is studying speech pathology at Brooklyn College and has had extensive training in ballet, tap, jazz and hip hop. She was supposed to perform for one of PacMan’s earlier bouts, but the contract ended up with another singer.

This time, the Sarangani congressman made sure Banawis would not miss the rare opportunity. She and her family flew to Los Angeles Friday night to meet the pastors and choir members and to rehearse for the first time.

“I am going to be incredibly proud of this experience,” Banawis said. “Being able to sing for the ‘People’s Champ’ has always been an aspiration of mine. He brought light onto the identity of Filipinos all over the world. I remember having to explain what a Filipino is to people who are unfamiliar with the Philippines, but now, just mentioning that you’re Filipino, people automatically say, ‘Oh, like Pacquiao!’”

Meeting the PacMan for the first time was a humbling experience for the young Banawis. “Despite all his accomplishments and his titles, he never emanated a negative aura. The congressman is such a simple guy who jokes around, and he’s not afraid to admit that he is human, that he is not perfect.”

The young singer said her admiration for Pacquiao grew even stronger upon meeting him in person. “For someone of his prestige, he still keeps his feet on the ground. He is selfless, a people-person and has no shame in expressing his love for Christ. These traits aren’t common in today’s society.”

Working part-time as a runway model between singing gigs, Banawis is a voice graduate of the prestigious Fiorello H. LaGuardia High School of Music & Art and Performing Arts. “This is the school the movie ‘Fame’ is based on,” she said.

“I expect victory on Pacquiao’s part, because I’m a fan, ha-ha! But I believe whatever result comes out of this fight is a part of God’s big plan. It’s all in His hands.”

Banawis added that Pacquiao represents the aspirations of Filipinos all over the world, and that “his victory is a victory for all of us.”

She credits mother Janette, who introduced her to music when she was still a baby, for her career success. Meanwhile, it was pop star Britney Spears who sparked her passion for singing. “I’d always run and dance around the house acting like a pop star, and based on this, my parents enrolled me in whatever vocal or dance lessons I wanted. They always back me up and pick me up. My parents are my backbone, and they’ve influenced me to pursue a music career.”

Banawis is set to wear a Filipiniana gown designed by LA-based Oliver Tolentino on the big night.

Come June 13, Banawis will be performing with Air Supply at New York’s iconic The Town Hall on Times Square. The show is being produced by DJ Filipino’s John Gadia, whom the 19-year-old also considers among her greatest supporters.