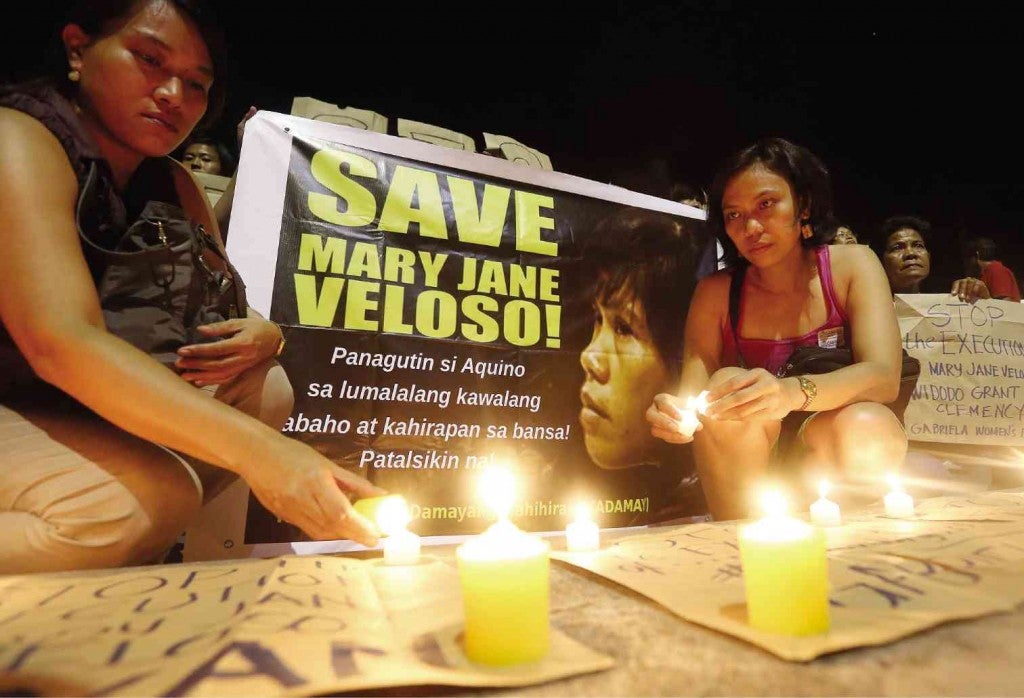 VIGIL FOR VELOSO Women activists light candles for Mary Jane Veloso, a Filipino migrant worker facing execution by firing squad for drug trafficking in Indonesia, during a vigil on the University of the Philippines campus in Diliman, Quezon City, on Sunday. MARIANNE BERMUDEZ

MANILA, Philippines–President Aquino left Sunday to attend the 26th Association of Southeast Asian Nations (Asean) summit in Kuala Lumpur, Malaysia, vowing to seek out Indonesian President Joko Widodo and try to save the life of Filipino citizen Mary Jane Veloso, who will be executed by firing squad in Indonesia on Tuesday.

“As we participate in the Asean summit, we will take the opportunity to continue our efforts to help our compatriot Mary Jane Veloso,” Aquino said in a speech at Ninoy Aquino International Airport before his departure for Kuala Lumpur.

“We will try to speak with President Joko Widodo of Indonesia to appeal her case,” Mr. Aquino said.

A Malacañang source said Aquino would meet Widodo before the start of the Asean leaders’ plenary meeting on Monday.

The source said the President would have a “pull aside” meeting with Widodo between 9 a.m. and 10 a.m. The plenary meeting starts at 10 a.m.

Veloso, 30, was convicted of drug trafficking in Yogyakarta, Indonesia, in 2010. She was sentenced to death by firing squad.

On Friday, Veloso, a single mother of two, was transferred from Yogyakarta to the maximum-security Besi prison on Nusakambangan island in Central Java, where the executions of death convicts in Indonesia are carried out.

Veloso joined nine other death convicts from France, Australia, Brazil, Nigeria and Indonesia on the island. Like Veloso, they had been convicted of drug trafficking.

On Saturday, after being visited by her family, including her two sons aged 11 and 6, Veloso received a notice of execution from the attorney general of Indonesia. She was told she would be executed on Tuesday, April 28.

Her lawyers and the Philippine Embassy in Jakarta were also notified about her execution, but the Department of Foreign Affairs (DFA) said Sunday that the lawyers refused to sign the notice, arguing that they had filed a second appeal for judicial review of Veloso’s case.

Under Indonesian law, a 72-hour countdown to execution begins with the service of the notice.

Charles Jose, spokesman for the DFA, said Veloso’s lawyers and the representative of the Philippine Embassy in Jakarta received the

notice in Nusakambangan at 8:22 p.m. on Saturday.

“[They] did not sign it, reasoning that there’s a second appeal,” Jose said in a text message.

In an interview on dzBB radio on Sunday, Philippine Ambassador to

Indonesia Maria Lumen Isleta said she did not know the effect of the Philippine representatives’ refusal to sign the notice of execution.

“But we are hoping they will give way to our request for a review [of Veloso’s case],” Isleta said.

The Philippine government filed a petition for a second judicial

review of Veloso’s case in the Indonesian Supreme Court on Friday.

Also on Friday, Migrante International, a group of migrant workers, filed a petition for a second review of her case in district court in Yogyakarta.

The petitions argue that it was not proven in court that Veloso was a drug trafficker. They also claim that Veloso was a victim of human trafficking, who, under international law, should be protected instead of prosecuted.

The convicts from Australia and Indonesia have also filed bids for a second review of their cases. But all the lawyers concede that the attempts are long shots.

The Supreme Court has said the ruling on the Indonesians’ appeal could be handed down as early as Monday, clearing the way for their execution.

Indonesian authorities have said all judicial reviews and appeals for clemency have been exhausted, and that the fresh legal maneuvers amount to delaying tactics.

She described Veloso as “very brave and calm.”

During their visit on Saturday, Philippine Embassy representatives received from Veloso four handwritten letters to President Aquino and Vice President Jejomar Binay, the Filipino youth, women looking for overseas jobs, and the people who put her in her current situation.

Veloso asked Aquino and Binay to help save her, the youth to stay away from illegal drugs, and the women looking for overseas jobs to go to legitimate employment agencies.

Binay, who handed a government appeal for clemency for Veloso to his Indonesian counterpart last week, urged Filipinos Sunday not to lose hope.

“We will continue to use all the avenues available to us [to save her],” Binay said in a statement.

In the fourth letter, she said she hoped the people who ruined her life would be bothered by their conscience.

She also expressed hope that the person who was responsible for her predicament would be arrested.

Despite what that person had done to her, she said, “I still pray to God [that you be forgiven].”

As the countdown to Veloso’s execution ran Sunday, members of Migrante International, the women’s party Gabriela and the Kilusang Mayo Uno gathered in front of the Indonesian Embassy in Makati City to protest her death sentence.

The protesters carried not only banners but also sleeping bags and pillows, as they planned a marathon rally.

As night fell, they lighted candles and prayed for the approval of Veloso’s plea for the commutation of her sentence.

“The next two days are crucial because this is the chance of the government to save Mary Jane’s life,” said Sol Pillas, secretary general of Migrante International.

“We hope that the government will be able to do what they were not able to do five years ago,” Pillas said, referring to the alleged failure of the government to provide legal assistance to Veloso during her prosecution in 2010.

The government said it had been helping Veloso from the start, but Migrante International, in a statement issued on Friday, claimed Veloso was represented by a court-appointed lawyer before and during her trial.

It said the Philippine Embassy in Jakarta engaged the services of the Indonesian law firm Rudyantho & Partners (R&P) only at the appeal stage.

R&P, the statement said, requested the Philippine government to investigate Maria Cristina Sergio, the alleged recruiter of Veloso, long before the filing of the first petition for a judicial review of the case.

“They (R&P), however, were dismayed to learn that the Philippine government attended to this only after the judicial review had been rejected by the Indonesian Supreme Court on March 25,” the statement said.

“Now, Aquino has a last chance to redeem his government and for Mary Jane’s sake, we hope that he does not fail,” Salvador said, noting that the government began to provide legal assistance to Veloso only after she had been convicted.

Aquino has other Filipinos on death row to save where he is attending the Asean summit.

Eighteen Filipinos are sitting on death row in Malaysia, although none of them is due to be executed soon.

Philippine Ambassador to Malaysia Eduardo Malaya said Sunday that while a number of Filipinos had drawn the death penalty in Malaysia for drug-related activities, not one had been executed.

“It is to the good fortune of the Philippines [that] there has not been a carrying out of execution of any of these death penalty convictions involving Filipinos,” Malaya told Inquirer.net in an interview.

“And that is something that I think we ought to recognize and be thankful for,” he said.

“There has not been an execution. It is also because there is an emerging sentiment here that maybe the [death penalty] is too harsh a measure for this or for any type of offense,” Malaya said.

He said most of the 18 Filipinos on death row in Malaysia were convicted for drug trafficking.–With reports from Nikko Dizon, Kristine Felisse Mangunay and Maricar B. Brizuela; Kristine Angeli Sabillo, Inquirer.net; and AFP

Aquino writes Widodo, Binay flies to Indonesia in bids to save Veloso

Aquino vows to save Veloso