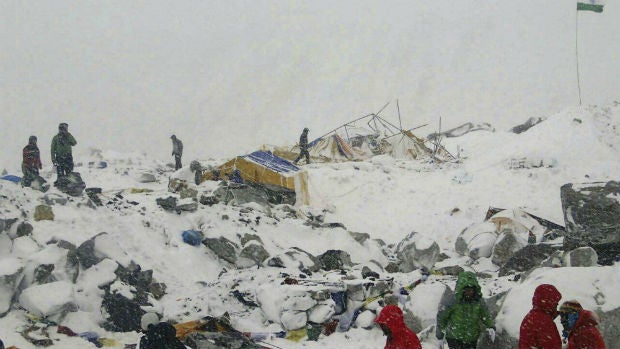 In this photo provided by Azim Afif people approach the scene after an avalanche triggered by a massive earthquake swept across Everest Base Camp, Nepal on Saturday, April 25, 2015. AP

Following the destructive magnitude 7.9 earthquake which struck Nepal on Saturday, the Department of Foreign Affairs (DFA) said that two Filipino mountaineers who are in Mt. Everest in Nepal have been declared safe.

The earthquake triggered an avalanche which swept the base camp in Mt. Everest, killing at least 10 climbers and guides and injuring an unknown number of mountaineers, reports said.

Foreign Affairs Spokesperson Charles Jose said that Jessica Ann Nicole Ramirez and Jose Francisco Oracion were in the base camp at Mt. Everest when the earthquake struck Nepal.

“They came from Everest base camp for vacation as mountaineers. They checked in at Khwopa Guest House, Bhaktapur, Kathmandu but are now in Durbar Square for safety,” Jose said in a statement sent to reporters on Sunday.

The Foreign Affairs spokesperson said that there are less than 200 Filipinos in Nepal, according to the estimate of the Philippine Embassy in New Delhi. No Filipinos were hurt following the strong earthquake.

DFA has sent a team to Nepal to assist Filipinos and get the two mountaineers to the Philippine consulate in New Delhi.

The magnitude 7.9 earthquake has killed 1,865 people as of the latest count of the Nepalese government. It flattened centuries-old temples in the country, including the nine-story Dharahara Tower, a Unesco World Heritage monument.

It was also felt in Indonesia, Bangladesh, Tibet, and Pakistan. DPL