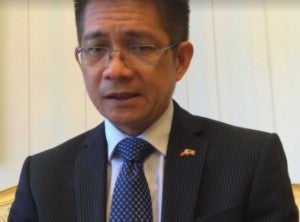 KUALA LUMPUR, Malaysia – The Philippines expressed its support for a declaration by Southeast Asian countries to combat extremism in the region.

In his speech before the Association of Southeast Asian Nations (Asean) Foreign Ministers’ Meeting in Kuala Lumpur on Sunday, Foreign Affairs Secretary Albert del Rosario said the Philippine government “lauds the efforts” of Malaysia in pushing for the Global Movement of Moderates Initiative.

“The Philippines remains absolutely steadfast in cooperating with Asean members, the United Nations and all other countries in confronting extremism and radical violence,” he said.

The Philippines is one with the Asean in its commitment to a culture of peace, tolerance, mutual respect and inclusiveness,” he said.

In an earlier interview, Philippine Ambassador to Malaysia Eduardo Malaya said the Declaration on the Global Movement of Moderates, which is supposed to be adopted by members of the Association of Southeast Asian Nations (Asean) during the 26th Asean Summit, could be an effective “antidote to religious extremism.”

“In my view, it’s important that this concept of moderation be pursued. This is an initiative, incidentally, of our host, Malaysia; and exploring this, pursuing this, could be an antidote to the religious extremism that we’re seeing,” the ambassador said.

The global community has been increasingly concerned with extremism after a slew of beheadings by the IS. The IS, which is based in Syria and Iraq, has reportedly been expanding its operations by recruiting people from various nations.

Del Rosario said the Philippines “condemns war crimes and crimes against humanity being perpetrated by the IS.” He explained that the government has already co-sponsored the UN Security Council Resolution 2178 on Foreign Terrorist Fighters and have supported the Asean Foreign Minister’s statement on extremist organizations in Iraq and Syria.

“We will contribute in the fight against extremism, terrorism, and crimes against humanity by engaging or cooperating with other countries in the areas of information sharing, joint investigations, educational campaigns, humanitarian assistance to victims, restricting flow of funds intended to finance terrorism, supporting resolutions aimed at curbing terrorism, and enhancing local legislation to address terrorism,” the Secretary said.

Meanwhile, Malaya said that in Malaysia, where the summit is being held, a number of individuals have already been apprehended because of their links to the Islamic State.

Malaysia, one of the countries where the IS has reportedly been recruiting, is the chairman of this year’s Asean. It has proposed that the declaration be adopted by the other leaders on April 28, when the summit ends.

Foreign Affairs Assistant Secretary Luis Cruz told Filipino reporters last week that the declaration “has already been on the table (of the Asean) for several years.”

“[The] global movement of moderates would pertain to like-minded states on how to combat the issue of extremism and prevent terrorism from flourishing in the region,” he said.

Late last year, reports said the IS has been recruiting Filipino rebels in Davao and other provinces in Mindanao. However, it has not been verified by Philippine authorities.

Mindanao is also where several armed groups have been operating. One of them, the Moro Islamic Liberation Front is pursuing peace negotiations with the Philippine government. However, its breakaway group, the Bangsamoro Islamic Freedom Fighters, and the Abu Sayyaf have earlier pledged allegiance to the IS. AC