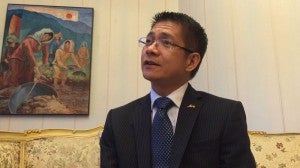 KUALA LUMPUR, Malaysia – While Mary Jane Veloso is set to face firing squad on Tuesday, the Philippine Embassy here assured the public that the 18 Filipinos in death row in Malaysia won’t be executed anytime soon.

Philippine Ambassador to Malaysia Eduardo Malaya said that while a number of Filipinos, mostly involved in drug-related cases, have been meted the death penalty, not one has been executed by Malaysian authorities.

“It is to the good fortune of the Philippines there has not been a carrying out of execution of any of this death penalty convictions involving Filipinos,” Malaya told INQUIRER.net in an exclusive interview. “And that is something that I think we ought to recognize and be thankful for.”

Malaya said that while Malaysian authorities, like the Philippines, view drug offences “with deep seriousness,” public sentiment pertaining to the death penalty has seemingly discouraged executions.

“There has not been an execution. It is also because there is an emerging sentiment here that maybe the carrying of death sentences is too harsh a measure for this or for any type of offense,” he explained.

There have been groups within Malaysia calling for the abolition of the death penalty.

According to the Department of Foreign Affairs, there are 18 Filipinos in death row in the country.

Malaya confirmed that most of them were jailed because of drug trafficking charges.

He said consular personnel regularly visit Filipinos in Malaysian jails. Working together to address their concerns are the assistance to nationals (ATN) officer, the Department of Social Welfare attache and non-government organizations.

Death penalty has been abolished in several countries like the Philippines on humanitarian grounds. Problems with the justice system also raise concerns that innocent individuals might erroneously be meted the death penalty.

Countries like Malaysia and Indonesia, however, continue the practice.

On Saturday, Veloso’s family confirmed that the Filipino would be executed on April 28 in Indonesia. Veloso was sentenced to death after she was found guilty of drug trafficking. She was arrested in 2010 after being caught carrying 2.6 kilograms of heroin.

President Benigno Aquino III has repeatedly wrote to the Indonesian government to appeal for Veloso’s life. He will fly to Malaysia on Sunday afternoon to attend the Association of Southeast Asian Nations (Asean) Summit where he will try to meet with Indonesian President Joko Widodo for another attempt to save Veloso. DPL