So draws with Carlsen who keeps lead in Gashimov Memorial chess 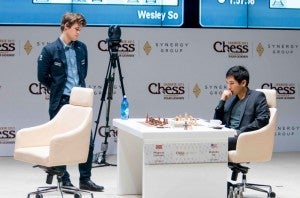 LAS VEGAS, Nevada — Wesley So drew with world champion Magnus Carlsen to keep his share of third place with just a round to go in the Gashimov Memorial chess tournament in Azerbaijan.

With the additional half point, the 24-year-old Carlsen has virtually captured the 30,000-euro first prize in the 10-man tournament, although former world champion Vishy Anand still has a chance to at least tie him at the top.

Carlsen has six points while the late surging Anand has scored his third straight win to inch closer to the Norwegian champion with 5.5 points.

Anand, a five-time world champion and at 45 one of the oldest among the Top 10 in the world, outplayed Shakhriyar Mamedyarov in another display of excellent execution from a well-prepared line.

“My second showed me this line, and I thought why not give it a try?” Anand said in an interview with chess-news. “It is nice, quite an unusual system.”

Although played just three days ago by Wei Yi, the 15-year-old Chinese prodigy, Anand showed the value of a dependable second, or assistant, in preparing for games.

His second, Grzegorz Gajewski, showed a variant of the Four Knights game to help pull out the victory giving Anand a mathematical chance to win the tournament.

So is one of the few players in the Gashimov Memorial tournament without a coach or a second.

So is tied for third and fourth places with Fabiano Caruana of Italy, each with 4.5 points.

The Italian, rated No. 2 in the world, faces Anand in the final game, which could determine the tournament champion.

In the 9th and final round Sunday, So will play the black pieces against Maxime Vachier-Lagrave of France.