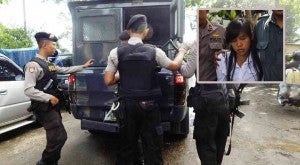 DEATH CARRIAGE Police officers stand guard as a detention car believed to be carrying death row prisoner Mary Jane Veloso, along with nine other foreigners, arrives at Wijaya Pura ferry port to cross to the prison island of Nusakambangan in Cilacap, Central Java, Indonesia, early Friday. Veloso (inset) is the only woman among 10 foreign drug offenders facing imminent execution by firing squad despite international appeals and fury for clemency. AFP

The countdown appears to have started for the execution for drug trafficking of Filipino maid Mary Jane Veloso in Indonesia with her transfer early Friday from death row in Jogjakarta to the last-mile island of Nusakambangan off Central Java.

Nusakambangan is a penal island off the port of Cilacap where death row prisoners are taken for execution.

“The lawyers and the Philippine Embassy were not notified about the transfer in advance,” Jose said.

Diplomats from other countries involved said they had not been informed of when the group would be executed, but the steps under way suggested that an announcement was imminent.

Speaking to reporters on Friday, Foreign Undersecretary for Migrant Workers’ Affairs Jesus Yabes said “things are moving fast” for Veloso and that the Philippines was not used to Indonesia’s strict stance on capital punishment, particularly involving foreigners.

Veloso, together with nine other convicted drug traffickers from Australia, Brazil, France, Nigeria and Ghana, was taken to the penal island at 2 a.m. Friday an hour after her mother, Celia, and two children—Mark Darren, 6, and Mark Daniel, 11—arrived in Jakarta to see her.

Veloso, 30, is the only woman among the 10 convicts set to face a firing squad. The other convicts are collectively known as the “Bali Nine,” as they operated out of the Indonesian resort island of Bali.

Indonesia also asked the embassies of the five countries to send representatives to Nusakambangan by Saturday, indicating that the executions were imminent, although an official 72-hour notice of execution had not been given yet, diplomats in Jakarta said yesterday.

Those countries are appealing to Indonesia for mercy for the convicts, but the Indonesian Supreme Court and President Joko Widodo have denied the appeals.

The head of an international migrants organization working to save Veloso on Friday confirmed her transfer to Nusakambangan.

Garry Martinez, head of Migrante International, said Edre Olalia, secretary general of the National Union of People’s Lawyers who left for Indonesia last week to help get a judicial review of Veloso’s drug-trafficking case, sent word by text message at 9 a.m. Friday about the maid’s transfer to Nusakambangan.

“But a transfer is just a transfer,” Martinez said, adding that Indonesia had not given the Philippine Embassy in Jakarta any “notice of execution.”

Quoting from Olalia’s text message, Martinez said that only after the Philippine Embassy has received a notice will the 72-hour countdown to execution begin.

Jose, who confirmed that the Philippine Embassy had not yet received a notice of execution, also said Veloso’s transfer did not mean she was about to be executed, as the Philippines was seeking a second appeal for judicial review of the maid’s case.

“Now that we have filed the second appeal, we hope that the Indonesian government will take this up first,” Jose said.