No turning back on PH peace process, says Hillary Clinton awardee at Georgetown 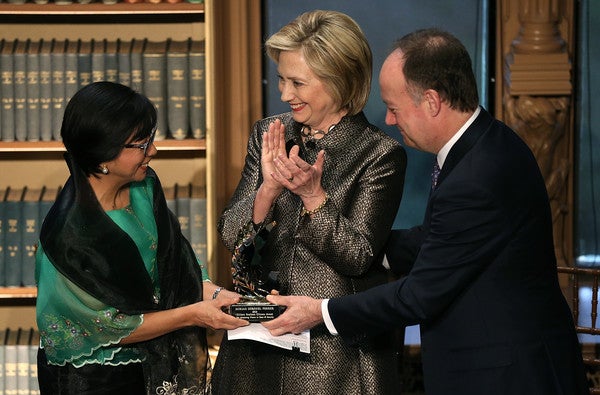 WASHINGTON, DC – “We have gone this far in our peace process. There should be no turning back.”

This was the message of lead government peace negotiator Miriam Coronel-Ferrer after receiving the Hillary Rodham Clinton Award for Advancing Women in Peace and Security on April 22 at Georgetown University.

“The Comprehensive Agreement on the Bangsamoro acknowledges a different narrative of our national being, one that would bridge our majority-minority divide toward a shared future where fellow-Filipinos live in peace under one flag in an undivided territory,” said Coronel-Ferrer, expressing hope and optimism for the future of peace in Mindanao as well as for the Philippines.

Clinton cited Coronel-Ferrer as a concrete example of a woman who has brought to life UN Security Council Resolution 1325 on Women, Peace, and Security passed in 2000 by being the first woman ever to chair a negotiating panel on behalf of a government in a peace process. She also recognized women as agents of change, drivers of progress, and makers of peace.

In her acceptance speech, Coronel-Ferrer also highlighted the important role women played in the Comprehensive Agreement on the Bangsamoro, which was signed in March 2014.

“These three women were not alone. They were backed up by a strong and active contingent of women outside of the formal table. From them, we got the strength and fortitude to see the process through, a delightful dynamic of women inspiring fellow women,” Coronel-Ferrer added.

She also talked about how the peace process aims to protect women and advance their role in society.

“Our peace process, indeed, was informed by the very goals of this award: to protect women against all forms of violence and advance the role of women in attaining peace and security in and outside of their homes,” Coronel-Ferrer said.

“I speak especially of the women in the Bangsamoro, who have endured the burden of strife, and who must now secure their places in the public sphere as equal partners in peace and development,” she added.

Ambassador Jose L. Cuisia, Jr., who attended the ceremonies, congratulated Coronel-Ferrer for her contributions to lasting peace in the Philippines.

“Professor Miriam Coronel-Ferrer [brings] honor to the Philippines as well as the much needed hope and catalyst to achieve a lasting peace in Mindanao,” said Cuisia.

“How fitting that former Secretary Clinton recognized women as agents of change, drivers of progress, and makers of peace,” Cuisia said, adding that Coronel-Ferrer’s trailblazing efforts as chairperson and the signing of the peace agreement last year is a critical instrument of peace in Mindanao.

“I am confident that with her leadership and vision, our country will be able to achieve stability the Philippines so richly deserves,” Cuisia added.

Aside from Coronel-Ferrer, Staffan de Mistura, former UN special envoy for Afghanistan, was honored for his work to ensure inclusivity of women in Afghanistan. British Foreign Secretary William Hague was among those awarded in 2014 when the award was launched by Georgetown University.

‘No turning back’ in peace process

Yes to peace, No to BBL