Ferrer gets Hillary award for peace 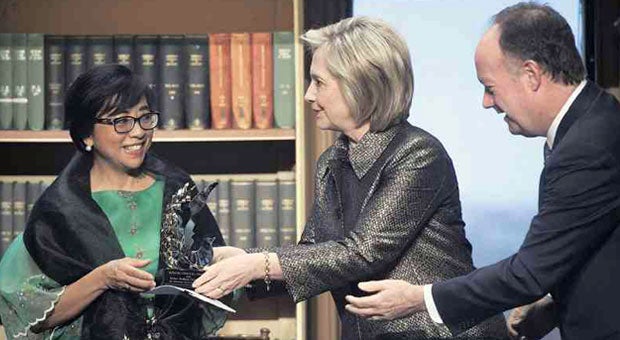 MANILA, Philippines—Accepting the Hillary Rodham Clinton Award for Advancing Women in Peace and Security in Washington, D.C., on Thursday, government chief peace negotiator Miriam Coronel-Ferrer lashed out at the alleged Islamophobia and misogyny that has left in limbo the peace agreement that the Aquino administration has signed with Muslim separatists in Mindanao.

“As I speak right now, the ceasefire remains in place. But the vision of lasting peace is being shut out by the narrow horizons of certain political elites, and by a public fed with misinformation and driven by prejudices bordering on Islamophobia,” Ferrer said as she accepted the award from Clinton herself in a ceremony at the Georgetown University Institute for Women, Peace and Security on Wednesday (Thursday noon in Manila).

“And misogyny too. If former secretary Hillary Rodham Clinton had been called a ‘funny lady’ in the course of her drive to find peaceful solutions and creative compromises in one area of conflict, I in turn had been called a “dumb bitch,” a traitor and a weak negotiator who bartered away the country to the Muslims/Moros,” she said.

Despite this, Ferrer said there was “no turning back” in the peace process and vowed that she would not be bowed by the harsh fallout from the Mamasapano debacle.

Ferrer was conferred the award for her “indefatigable work to bring about peace in the Philippines and for your historic role as the first female chief negotiator to sign a comprehensive peace agreement,” as the institute’s executive director, Ambassador Melanne Verveer, stated in a letter informing her that she had been chosen for the honor last February.

Verveer said the Clinton Award was “bestowed annually for exceptional leadership in recognizing the important role of women in creating a more peaceful and secure world.”