Bruce Lee and the Filipino art of escrima 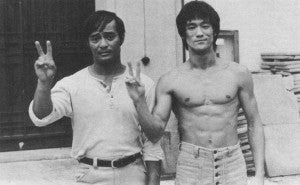 First posted in PositivelyFilipino.com (As Enter the Escrima: Bruce Lee and the Filipino Martial Art)

SAN FRANCISCO — Bruce Lee is one of the greatest martial artists, if not the greatest master of the art to ever live. He revolutionized cinema forever, changing the way the western world perceives martial arts. Over the course of his life, Lee’s fame came not only from his films, but also from the creation of his own martial art. Jeet Kun Do, “the way of the intercepting fist,” drew influences from every martial tradition Lee studied, which included Filipino martial arts.

What many may not know is that Lee was an avid practitioner of the Filipino escrima (stick fighting). Danny Inosanto (a Filipino American), one of Lee’s closest friends and finest students, introduced him to the art.

Inosanto recalled how Lee at first “took a pretty dim view of it” but later explained “what he liked and didn’t like about escrima.” Inosanto believes “what changed (Lee’s) mind was the emphasis on the empty hands and seeing through the movies that it had a lot of functional value.”

From the repertoire of Bruce Lee masterpieces, two films stand out the most in terms of Lee’s links to Filipino martial arts – “Enter the Dragon” and “Game of Death.”

In “Enter the Dragon,” Inosanto, explained, the message Lee wanted to convey to the public was to “know all combative ranges; be able to pick up anything and be able to use it.” This is best illustrated in the fight scene with the guards in which Lee uses their own weapons against them.

Lee demonstrates escrima, using doble baston (double sticks) to subdue the guards. This concept is directly related to Filipino martial arts because of the ability to adapt to the environment and utilize it to one’s own advantage.

In “Game of Death,” Lee fights Inosanto using both double sticks as well as nunchaku. What many may not know is, Inosanto taught Lee how to use nunchaku through the Filipino equivalent called tabok-toyok.

During the process of the film, Inosanto explained, “Bruce’s original concept for ‘Game of Death’ was to educate the film viewing public by making people aware that there are many different types of martial arts and that each martial art has a value in a certain environment.”

WATCH: Bruce Lee and Danny Inosanto in “The Game of Death”

Because many Filipino martial arts are weapons-based systems, it could be assumed that Inosanto was chosen for the film to properly represent the art. The movie also touches on the aspect of adaptation as the film progresses; Lee must eventually fight Kareem Abdul-Jabbar who is seven feet tall.

AJ Ruiz is the Public Relations Manager for Eskabo Daan in San Francisco. He is currently pursuing a Masters Degree in Asian American Studies at San Francisco State University.

MMDA: Traffic jam on Elliptical Rd towards Commonwealth Ave due to shooting