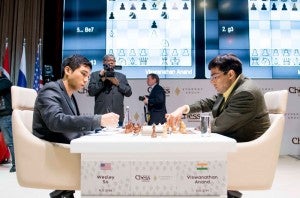 Wesley So and former world champion Vishy Anand in the fifth round of the Gashimov Memorial chess tournament in Azerbaijan. PHOTO BY SHAMKIR CHESS 2015

LAS VEGAS, Nevada — Former world chess champion Vishy Anand of India stopped the streaking Wesley So cold on his tracks, beating the 21-year-old grandmaster in the fifth round of the Gashimov Memorial chess tournament in Shamkir, Azerbaijan.

Anand, a former Philippine resident who competed in several tournaments there in the late 1990s, showed the daring of his youth with an aggressive game of a Closed Ruy Lopez.

The key move was the 14th, a pawn move in which Anand, who so far has had a quiet tournament with four draws in five games, sacrificed a knight to launch a kingside attack.

So was forced to give back the knight several moves later under intense pressure, and the five-time world champion prevailed after 45 moves in a queen-and-pawns end game.

So is still at second with 3.5 points while Anand stayed at third with three points in the 100,000-euro tournament being held in honor of Azerbaijani grandmaster Vugar Gashimov, who died in his 20s.

After a rest day tomorrow, Wednesday, So will face Mamedyarov Shakhriyar, one of two Azerbaijani grandmasters in the tournament.

Although down in the standings with only 2.5 points, Shakhiyar has just came off an impressive win over former world champion Vladimir Kramnik of Russia in the fifth round.

Shakhiyar and Kramnik share fourth and fifth places with Kramnik.

“It doesn’t really matter who you’re playing…my opponent made lots of accurate moves today and it’s an uncomfortable position,” So said in an interview with chess24.com.

Anand was similarly gracious in victory.

“Today was a very nice win against the tournament leader, who’s just been dominating,” Anand said, paying tribute to So’s great run in the tournament so far.