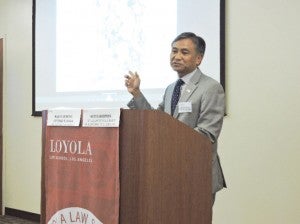 LOS ANGELES — “They always shoot the messenger,” said retired Major General Antonio Taguba, a Filipino-American who is best known for reporting about torture and abuse at Abu Ghraib prison in “The Taguba Report.”

In January 2006, Taguba was directed by the Army’s vice-chief of staff to retire after he reported on his investigation. With a clean 30-year career in the military, Taguba attributed his dismissal to his involvement in the investigation.

“To be accused of being overzealous and disloyal – that cuts deep into me. I was being ostracized for doing what I was asked to do,” he lamented.

Taguba gave his “unfiltered” account of the Abu Ghraib prison probe he led to students and teachers at Loyola Law School in Los Angeles on Monday, April 13.

The retired major general said he was given 30 days to complete the informal investigation with no extension. As the leader of the inquiry, he selected a team of officers, lawyers, a psychiatrist and a paralegal to delve into the treatment of prisoners.

Abu Ghraib was the main point of reference used to investigate torture, Taguba said, but the team also explored other detainee sites, such as Camp Bucca, where he said there were about 1,500 detainees.

Two parallel investigations took place in the 30-day period so as not to corrupt the other. A total of 55 witnesses were interviewed for the internal investigation.

Taguba described a huge hole in the wall at Abu Ghraib where prisoners went through and said 8,000 to 11,000 detainees were processed at the facility.

“[Abu Ghraib] was a huge, fortress-like complex, like a citadel,” he said.

At the facility, which was also the center for joint interrogations in Iraq, Taguba found that prisoners were put in tents and were not always fed.

“It was an ugly scene unlike anything my team or I had ever seen,” he said.

Another finding the team made was the liberal use of laptops, cameras and other devices although it is against the law to photograph prisoners. He said people made screensavers of graphic images depicting inhumane treatment and sexual assault of detainees.

Furthermore, Taguba said there was no clear command control and that military police were passive, as they didn’t set any rules for interrogation.

At the conclusion of the investigation, Taguba made several recommendations for correction that he said were largely ignored. Among these included the closing of Abu Ghraib due to its notorious reputation.

The facility was shut down only in 2014.

In an article titled “Diagnosing and Analyzing Flawed Investigations: Abu Ghraib as a Case Study,” author by Keith Rohman of Public Interest Investigations, Inc. provided an analysis of the investigations launched to look into the scandal.

The article generally said that Taguba’s report was an unbiased and reliable account, compared with others, including The Schlesinger Report (which Rohman said provided minimal to no sources for its findings) and The Mikolashek Report (which was “inconsistent with the tone expected in [an] unbiased report”).

Rohman also commended Taguba for his work and said the former military man has not aimed for fame for his actions.

“Gen. Taguba hasn’t sought public recognition and he hasn’t written a book,” Rohman said at the law school on Monday as he introduced Taguba.

Taguba has said he suspected that military police were provided guidance on their actions.

“From what I knew, troops just don’t take it upon themselves to initiate what they did without any form of knowledge of the higher-ups,” Taguba said, according to Rohman’s article.

However, due to investigation limitations, he said he was unable to print those suspicions.

“Somebody was giving them guidance, but I was legally prevented from further investigation into higher authority. I was limited to a box,” Taguba told The New Yorker after leaving the military.

He also told his audience at Loyola that torture is ineffective.